Take Your Poetry to the Polls! 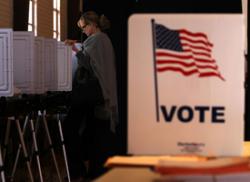 Election day is right around the corner, and just like poetry, (if you are a registered voter), voting for who you would like to be President of the United States is a great way to have your voice heard! As a poet, you already write about what inspires you, so why not write about making a difference by voting? Whether you definitely know who you want to vote for, or you’re still figuring it out, writing a poem about your feelings towards the election is a fun way to share your opinions with the world. Here are some tips and inspiration for writing a poem about the election:

faith
never undermine oneself to make a change always have the ability to trust yourself and know that things will get better to...

Moments
There's Always gonna be These moments where us both Are going to be in need. In need of a voice, A touch, A kiss, In need of...

Skinny
I'm big and fat and ugly. Just as ugly as the Ugly Duckling. But even more, so they say. I weigh 126 and that's not okay. I...
END_OF_DOCUMENT_TOKEN_TO_BE_REPLACED

Take Your Poetry to the Polls!