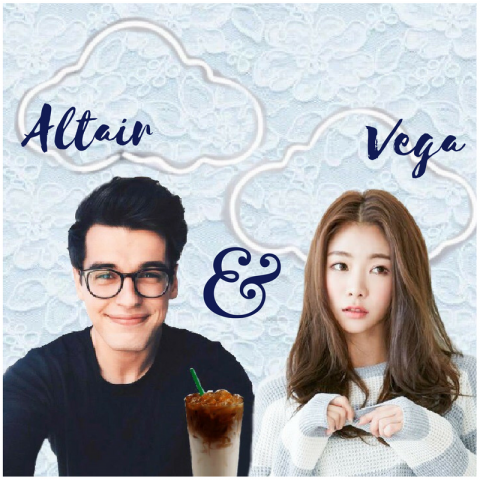 a caramel macchiato with too much ice on topespresso bleeding into milk and sugary syrup humidity coating the plastic cup with condensation a misspelled name that belongs to someone else slipping through your fingersthe green straw too long even for a medium cupthis is our first kiss though he will never know itII.

pink lashes left in your palms from pressing down on prickly blades of crabgrass the soil settles in the creases on your fingers our last moment before we both let goIII.

he closes his eyeswith his long lashes and big glasseshe looks like a little boy who grew up too fastand is tired of playing dress up in his father's clothesthe bus wheezes merrily along gently bumping our shoulders together i close my eyes and pretendthat we're dreaming of dipping our fingers in the same galaxies and the sun finally gets to meet the moonIV.

constellations like vega, altair, deneband if you ask him what took him so long he'll tell you it was the suspendersas he squirms, trying to adjust their lengththe first night we met i stumbled over my wordsbut he understood anywayand then we laughed like we had been doing it for yearsthis is what i want him to remember V.

but I will remember that he doesn't eat tomatoesthat he smiles like there's no tomorrowthat his favorite color is red that he still has to look at the keyboard when he typesthat he is the type of boy who will mix every drink from the soda fountain and try to drink itjust for funi will remember all of these thingsbecause he was the firstbut i never told himVI.

i haven't seen him sincehe doesn't reply to my emails or pick up the phonei know it's not meant to be like in the bookswhere every story ends the same waywith dawn bathing the world in blush and saffronand mist curling over the dew-soaked grasswith mr. darcy and a kiss by a crackling firewe refuse to be reduced to a romance novel read under the covers in the middle of the nightinstead, we will cross the milky way on a bridge of magpiesif only to just catch a glimpse of each otherVII.

it's lonely sometimes without him here but I know that it's time to let him goto stop trying to write bad poetry about him(i wrote a lot of bad poetry about him)to stop racking my brain for the little details to fill in the cracks and just let our memories beVIII.

Poetry Slam:
My Year in Poetry Scholarship Slam - CLOSED
This poem is about:
Me
Poetry Terms Demonstrated:
Allusion