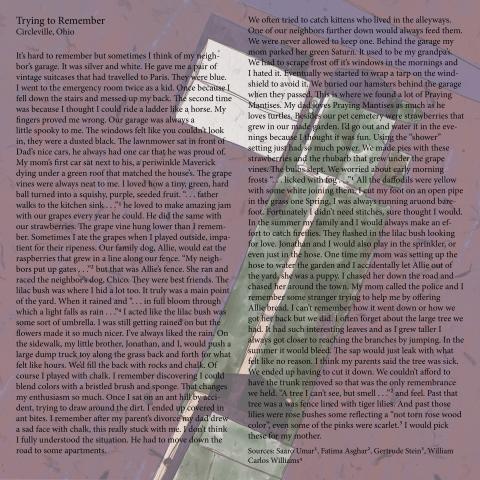 It’s hard to remember but sometimes I think of my neighbor’s garage. It was silver and white. He gave me a pair of vintage suitcases that had travelled to Paris. They were blue. I went to the emergency room twice as a kid. Once because I fell down the stairs and messed up my back. The second time was because I thought I could ride a ladder like a horse. My fingers proved me wrong. Our garage was always a little spooky to me. The  windows felt like you couldn’t look in, they were a dusted black. The lawnmower sat in front of Dad’s nice cars, he always had one car that he was proud of. My mom’s first car sat next to his, a periwinkle Maverick dying under a green roof that matched the house’s. The grape vines were always neat to me. I loved how a tiny, green, hard ball turned into a squishy, purple, seeded fruit. “. . . father walks to the kitchen sink . . .”1 he loved to make amazing jam with our grapes every year he could. He did the same with our strawberries. The grape vine hung lower than I remember. Sometimes I ate the grapes when I played outside, impatient for their ripeness. Our family dog, Allie, would eat the raspberries that grew in a line along our fence. “My neighbors put up gates . . .”2 but that was Allie’s fence. She ran and raced the neighbor’s dog, Chico. They were best friends. The lilac bush was where I hid a lot too. It truly was a main point of the yard. When it rained and “. . . in full bloom through which a light falls as rain . . .”4 I acted like the lilac bush was some sort of umbrella. I was still getting rained on but the flowers made it so much nicer. I’ve always liked the rain. On the sidewalk, my little brother, Jonathan, and I, would push a large dump truck toy along the grass back and forth for what felt like hours. We’d fill the back with rocks and chalk. Of course I played with chalk. I remember discovering I could blend colors with a bristled brush and sponge. That changes my enthusiasm so much. Once I sat on an ant hill by accident, trying to draw around the dirt. I ended up covered in ant bites. I remember after my parent’s divorce my dad drew a sad face with chalk, this really stuck with me. I don’t think I fully understood the situation. He had to move down the road to some apartments. We often tried to catch kittens who lived in the alleyways. One of our neighbors further down would always feed them. We were never allowed to keep one. Behind the garage my mom parked her green Saturn. It used to be my grandpa’s. We had to scrape frost off it’s windows in the mornings and I hated it. Eventually we started to wrap a tarp on the windshield to avoid it. We buried our hamsters behind the garage when they passed. This is where we found a lot of Praying Mantises. My dad loves Praying Mantises as much as he loves turtles. Besides our pet cemetery were strawberries that grew in our made garden. I’d go out and water it in the evenings because I thought it was fun. Using the “shower” setting just had so much power. We made pies with these strawberries and the rhubarb that grew under the grape vines. The bulbs slept. We worried about early morning frosts “. . . licked with fog . . .”1 All the daffodils were yellow with some white joining them. I cut my foot on an open pipe in the grass one Spring, I was always running aruond barefoot. Fortunately I didn’t need stitches, sure thought I would. In the summer my family and I would always make an effort to catch fireflies. They flashed in the lilac bush looking for love. Jonathan and I would also play in the sprinkler, or even just in the hose. One time my mom was setting up the hose to water the garden and I accidentally let Allie out of the yard, she was a puppy. I chased her down the road and chased her around the town. My mom called the police and I remember some stranger trying to help me by offering Allie bread. I can’t remember how it went down or how we got her back but we did. I often forget about the large tree we had. It had such interesting leaves and as I grew taller I always got closer to reaching the branches by jumping. In the summer it would bleed. The sap would just leak with what felt like no reason. I think my parents said the tree was sick. We ended up having to cut it down. We couldn’t afford to have the trunk removed so that was the only remembrance we held. “A tree I can’t see, but smell . . .”2 and feel. Past that tree was a was fence lined with tiger lilies. And past those lilies were rose bushes some reflecting a “not torn rose wood color”, even some of the pinks were scarlet.3 I would pick these for my mother.

Poetry Slam:
Glow-Up, Grow Up Scholarship Slam — CLOSED
This poem is about:
Me
My family
My community