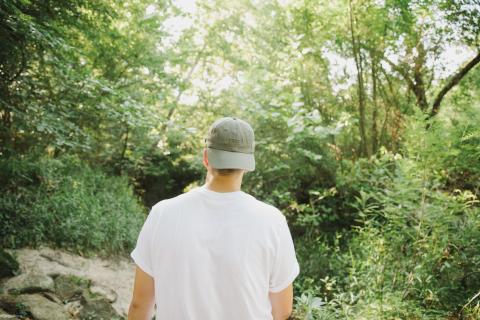 There once was a boy who cared what people thought.

He thought about other people’s thoughts quite a lot.

What he really wanted, the boy struggled to know,

As he spent so much time trying to grow

Into what he thought his world wanted him to be.

As he grew older, it became easier to see

The distinction between the desires of his own,

And those his world wanted to be known.

He thought in great depth about what it was

That he wanted to get out of life, simply because

Thinking was the only way he knew

To come to conclusions anew and anew.

After years of thinking and pondering,

The boy had reached a powerful conclusion,

That brought to an end, an era of confusion.

The boy knew what he wanted,

And, by the question, no longer was haunted.

The boy knew that he wanted to have joy

And that it is true passion he now must employ.

He wanted to find that thing he was void of,

He wanted to find that something to love.

So again the boy began thinking and as he was thinking,

The boy changed in many ways,

All part of finding the thing which to love,

He tried many things from below and above.

He stopped being ruled by the standards around him,

And in ways of unwanted commitments he started to slim.

The boy started finding things that he enjoyed

So much that every worry and doubt was swiftly destroyed.

He gradually was required to

Spend less time contemplating what he wanted to do.

Then one day the boy stopped brooding

To look up and examine and finally concluding,

With joy in his heart,

So full he felt it could split it apart,

A moment that before had gone undreamt of

He adores what does as he’s found what he loves.