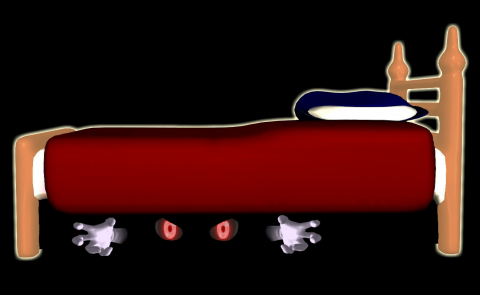 I remember flicking my bedroom light off and dashing to my bed for cover.

You see, there was this monster under my bed, but he could only get me in the dark.

And the means of safety was laying in my bed.

Come to think of it, I think I liked it better when the monsters were under my bed.

All I had to do was close my eys and throw the covers over my head,

Then I'm safe laying in base.

But as I got older I began to learn that the real monsters weren't under my bed.

These monsters out here today are worse than that.

No they don't have sharp teeth or claws that can dig beneath your skin.

They've evolved so much that they don't hide from the light.

They disguise themselves as human, so convincing that in the confusion

We trust them with our lives, something they only want to ruin.

The charade that they pull is just an illusion

They want to end the human union and start a new movement.

One where they, the monsters, rule over us, the people.

"We the People of the United States, in order to form a more perfect Union, establish Justice ..."

Meanwhile the monsters are screaming, "JUST US

Deserve life, liberty, and the pursuit of happiness."

The rich get tax cuts, the poor get pay cuts

And the wounds don't quite heal the same.

These monsters prey on monetary gain, and the power goes to their heads rendering them insane.

These monsters are apathetic about everything that doesn't directly affect them,

And they make unfair decisions based on what's good for them, and not for all.

You can never be too safe, so don't trust them at all.

They're in your pocket, in your home, at your job, in your dialect, they're the fly on the wall.

But it's only a matter of time before their corrupt empire starts to fall.

They'll be exposed to the People, of all their flaws

The evidence of their horns, fangs, talons, and claws

And as I rest my head on this pillow in this bed,

As I recollect dorwning in a sea of Egyptian cotton,

Impenetrable to the figment of my imagination who I've never forgotten

I can only think of how safe I felt then, and how trapped I feel now.