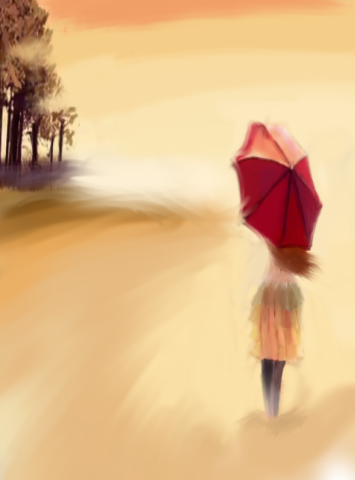 He had been 'reading' for

As long as he could remember.

His mother's voice was soothing to his ears

As it washed over them in a soft, murmuring tone.

A tone that was betrayed almost every time

Due to her excitement.

Her voice carried over the situations,

Dancing out a literary waltz on the ripe pages

That wafted the smell of old and new parchment.

Her ink-stained fingers would skirt across the page as she read,

Making it easier for his tiny eyes to follow along

—though he never did.

The distinct, dark curves and dips of the letters

Had no bearing on him.

His attention was on her.

When his mom spoke

It didn't matter who it was to;

Everyone listened with rapt interest.

Bursting with an elegant refinement that demanded attention.

He honestly couldn’t even remember one story

Just to hear her voice.

Just to hear the warmth

That she exuded so rawly in just her voice

Wash over him and kiss him goodnight by itself.

Just to feel completely encompassed by love and security.

And then, while he was blissfully unawares

And enveloped in the laughter of his closest friends,

The voice that he had cherished vanished.

All of a sudden, there were no sweet murmurings

Of love and promises of happiness to help him drift off to sleep.

There was no voice forming shapeless words

That he hadn't bothered to recognize.

There was no presence that loomed over him protectively

Before planting a warm kiss on his forehead

Just as he was on the cusp of unconsciousness.

There was no her.

Because she was dead.

He had been ‘grieving’

For as long as he could remember,

That permeated the depths of his soul.

But he found her everywhere;

She was in the trees,

Dancing along to the flowing harmonies of the wind,

Drifting words down to him along with the

Crushed and dried by winter’s

Skimming along the books

That he had ignored,

He could still find her in every letter

In every page that he glimpsed himself.

Every syllable of every word bespoke of her.

Her voice danced in his dreams,

Behind his lids closed in REM sleep.

And when his eyes found themselves

Irrevocably drawn to the mirror, as

He could find her in the curve of his lips,

The shape of his nose,

And the mist of his breath as he whispered

Words of loneliness and longing

That would evaporate as soon as they were uttered.

Because wherever words manifested

He would find her.

She had become words themselves to him,

Manifesting wherever she desired.

She had redefined the very meaning of

Reading and writing from the moment

He first heard her voice

And continued to do so

After the melodic whispers had become

And he would speak novels about her,

Using the darkly sloping and slanting

Spindly bodies born from the ink of his pen,

In numerous languages to numerous people.

His mother was forever written in his brain

And he would forever write her into others.

He would change the way that we grieve,

Would delicately and necessarily weave the cure in

With the predated disease that plagues us all,

Would birth a silver lining drenched with and drowning in tar

As it struggles to find its light and stay afloat.

The hindrance that grief presents—

The way that it weighs down our frames with exhausting lead

And defeats the proud set to our bodies with fists that

Seem all too lucid—

Is something to be conquered

By the very ones who find their wills liquidated by it.

That boy who secretly and silently cried for his mother,

That elderly man who lost a spouse

Before his own time had come,

That girl whose brother died fighting for a country

She no longer could bear to be in without him,

And the weeping mother that had a child torn

From her very soul;

If change could lend them a hand

And show them how to turn their grief

Around and use it as precious fuel

To burn on, perhaps even brighter than before,

Life would be different by leaps and bounds

Now that acceptance would have made lasting, but tender roots

In their painfully afflicted minds.

For death is unchangeable,

Its hand ghosting along an immeasurable

Amount of people and spiriting them away.

Now, if only the people left drowning behind

Could force that hand into the temporal world

And, with a failing but quivering strength,

Use it to pull themselves up.

Any opinions are welcomed and criticisms are appreciated.