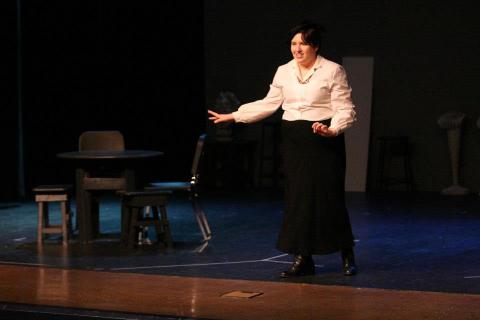 My directors always tell me to just go whenever I am ready,
And I feel as if this is also true with life.
This blank slate is my stage,
The aimless reflections I write in the middle of the night my blocking and lines.
You, dear reader, are part of my audience,
And the house is packed with seven-billion people.

Fifteen years ago I was cast as a confused child.
My lines paint my character as humble and kind.
Every time the spot light shines on them, they retreat to the shadows
And they don't allow themselves to take up too much of the stage.
My character's seemingly humble to hide anxiety,
The fear of truly standing tall and shining like the powerful being they strive to be.
Those seated do not know the fire the lights and gazes cause in my soul,
And by the end of the night I have scorch marks all over my once pure skin.

Scripts can be deceiving.
You could look at the dialogue and assume you know the whole show.
It might not occur to one, but the characters have parts of them people can explore.
Parts you should explore.
I do not allow others to explore, though.
I just hand them my script and say "Here's all you need to know.
"All I want you to know about the story."
Even in my own script I am not a lead for the first hundred or some pages.

Over my whole lifetime I've studied my script in more detail than anybody.
I've been author, director, and actor,
The crafted tech crew, too.
After every show the audience doesn't know that they haven't seen this character fully.
Years of character analysis for what?
A crowd who eats during my performance
And thinks they know the show better than me.

But that is fine.
They think they saw a show about a kid who loves the world.
They don't realize it is a costume,
but that is the point, is it not?
The audience is supposed to get lost in my performance.
I would rather them believe it is my true face
Than to see the flaws my stage makeup covers.
There is a reason for masks in theatre.

This poem is about:
Me
My community
Our world