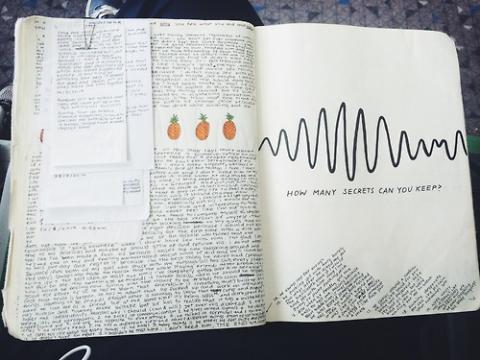 The first thing I ever learned from her is that when she says she doesn't care, she's really lying through her teeth.

She's one of those girls that's been fucked over so bad, so many times by the rest of the world that she thinks it's easier not to feel.

See she's got this thing called manipulation down to a fine art.

She's not the type of girl to call and say she misses you but rather that she needs you & not you but something.

Wether it's the weed, the booze or the sex.

Faker then her smile when she tells you that nothings wrong.

But in her mind, she's so far gone that she ends up pushing away everyone she's ever really cared about, so far away that they won't ever look back.

The pain of her past haunts her everyday thoughts.

Each move she makes, influenced by the mistakes of yesterday

& Wether they're right or wrong, she doesn't care, just as long as she's not the one whose hurting.

She's got this idea that if she doesn't talk about it, doesn't think about it, if she just acts like it's not there, then it'll go away.

She's dead inside but she can still pretend.

This girl survives on a memory box full of nothing more than what it is; memories.

Old photographs and letters, that's what keeps her chin up these days.

Those scars haven't faded and in a way she knows they never will.

I used to feel bad for the cards that life has delt her.

I used to want to help and believe me I tried

But time and time again, it was I who left hurt.

So I cut her loose.

It took time but I realized that you can't help someone who enjoys the excuse of their own pain so much.

She wants to sink.

So who am I to stop her?