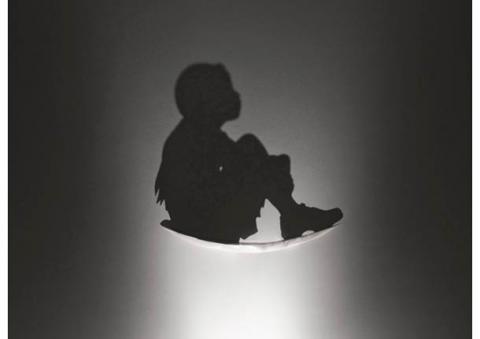 I didn't grow up in a home,
I grew up in houses,
13 schools and a murder attempt and "Run as fast as you can, find the neighbor, and stay there till I call the police!"
My mom's ex-boyfriend,
hammering on the door with meaty fists
drunk-slurring out the words "I'll kill you, I'll kill you, I love you, I'll kill you."
Handcuffs seen through the bars of foggy window blinds,
lit by red, blue, red, blue, white.
The warmth of my breath wasn't enough to
thaw the frozen terror, or to
slow the breathing of my little sister
as she fought the panic and
the smoky air and her
asthmatic lungs
because sometimes our bodies understand us better than our minds
and they want to stop breathing.
Tension in the space between the downstairs and the up,
a poorly-chosen now-ex-wife to my father
simmering like a pot over high heat
hissing through her nostrils
like a vision of the devil
red and angry, and
the shower water was left on too long
while my sister went to find a towel and
now her footsteps are smoldering on the stairs and
her eyes are slitted and her nostrils flared and --
Prescience: noun. It means "the fact of knowing something before it takes place;
foreknowledge; also called divine omniscience."
Save my work on my laptop, close the screen.
Smooth my hands through my hair.
Is Dad home to witness what's about to --
The pot boils over.
Fever pitch,
She's kicked down the door --
Dad's footsteps mangle the stairs --
"What the hell are you doing?"
(I mustn't listen to the words of the devil.)
The shower curtain is ripped from its rod,
my sister and a surprise shriek,
the first use of violence my dad has ever made to save her.
He holds the devil back in his arms.
The devil fights like an oiled cat.
Red scratches near my father's eyes
like tears, like tears.
"We're leaving."
Christmas alone with my dad and my sister.
Joy tastes like fried chicken reheated on the stove,
and catharsis.
Time buries memories and strong emotions
into a box we call Ourselves,
into a person,
and the handcuffed boyfriend and the devil are
as much a part of my psyche as
I am.
I can't lose them by speaking about them,
but by remembering them I can change who they were.
The hits keep coming as
I try to afford college and fail,
and the betrayal of my parents remind me how
the tender crack of bone was a eulogy for my childhood.
But I've dislocated them, this time, from me,
and found a position in the Navy, and
the Navy will pay my Medical School if I'll give them an A.
I'll give them more than an A.
I'll give them a soldier.
I'll give them a fighter.
I'll give them dedication and fearlesness and boldness
that I hadn't been taught at a young age
because I'd been taught about fear
and helplessness
and the importance of fast legs and strong lungs.
Who I am is the Time-smoothed product of a life spent fighting and
the smile that is as determined to spread hope
as the child was at running.
Poetry Slam:
#NoFilter Scholarship Slam - CLOSED
Guide that inspired this poem:
How to Enter a Poetry Slam