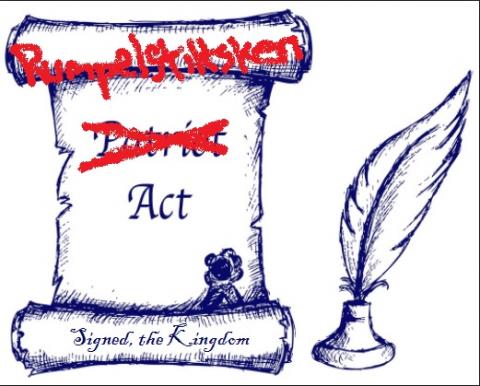 Once Upon A Time, there was a poor father,

Doing what he can to provide for his daughter.

Goes up to the King and says, "Hey look at this!

Here is something for ya that you don't wanna miss!"

Father goes, "Hey yo King, here's a claim most bold.

My pretty daughter here? She can turn straw into gold."

King tries his luck, she's put in a room with a spool.

Girl's scared as hell, for this she can't sew.

Luckily, she meets someone who's in the know.

A little goblin dude, he comes and helps her out thrice.

But he ain't just doing it just because he's so nice.

"Guess my name or give your child, that's the deal, ya see."

She agrees, now how can this end properly?

Now usually, you would see the new Queen's way out of the jam.

But this rhyme? This time someone else has a plan.

Another dude comes in and says "I can help you out.

But first, let me tell you what this is really about."

That little goblin dude? He steals kids just for fun.

Most of them don't make it, and I'm still on the run.

But we can end it now, let me figure it out.

So the dude goes to work, he sets something weird up.

Sets up a system that let's you get the closeup.

Finds a way to track the whole kingdom.

Finds the little goblin dude and when it's all said and done,

Goes to the Queen and says, "Now we know his name.

He is Rumpelstiltskin, and that was his game."

So the Queen plays the game, wins, and now her son is free.

But what of everyone else? Where will they be?

It doesn't feel right to have no freedom or privacy.

But the dude says that this is how it has to be.

The people aren't happy, but in the name of safety,

Privacy eroded, and this is how it's gonna be.

Queen doesn't like it, but the dude has his way.

The Rumpelstiltskin Act is here to stay.