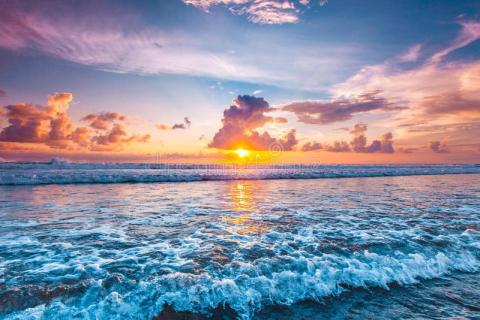 I was privileged to have sedentary on the seashore in seraphic poetic submersion,
The ringing sounds from the distant horizon made me entirely lost in my speculation,

When the sounds of Kallol from far nimbly touched my ears to distraught me all of a sudden in collision,
In that transcendental moment, astounded to find the ringing sound subliminal turns into the roaring waves in spiraling motions,

Reminded me of my trivial existence in contrast to it's immense vastness and mystical presence in connotation
More and more it played with the sounds, the rhyming sea in enormity was stirring my inquisitiveness,
The sea's matchless rhythm appeared as the encompassing natures euphoria, not yet fathomed!

The unchained melodies of the seagulls fluttering along with the tones were giving vent to it's untiring assonances in motions,
Everything including the sea beach creatures in perfect harmony were pacing in locomotion!

There was absolute consonance in symmetry everything surrounded the sea, even a drifting wood, beyond my imagination
as they edified to be well versed with the cryptic connotations of the sea's peerless rhythms' notions.
Their intense bonding with the sea's rhyming couplets were their own, couldn't touch the pens of interpretations.

The sea with it's salinity, deep currents and gigantic cycles is indeed s classic, a magnificent creation!
It's rhythm so impactful that in a nutshell, in the seashell the whirling sounds rings in eulogy of its synchronization.
The ringing rhyming connotation reminded me " when the calmness of the nature in rhythm
are being agitated in various forms, emerges the abyssal cyclones and eruptions! "

The beach is not the sweep of sand, but a perennial testimony of the rise and fall of human civilizations
Even the beach pours the rhythm when the sea rings in motion, although inaudible in intonation,
Paradoxical, even the upper end of the river yearns to submerge in it in complete conviction
At night, the incessant rhyming upheavals of tidal ebb and flow in presence of the magnificent moon,
By taking shore's consent rhymes with the enormous creation in arcane melodic union.

Is there anything more alluring than the way the sea refuses to stop caressing the shoreline even in dejection?
No matter how many times the shore sent it back, an unparalleled epochal epitome of unconditional outright selfless devotion!
I brought shore kissed empty shells and a drifted wood while bidding adieu to the mystic motion!

As a mementos of the momentum of the exquisite memories of the sea to linger on,
The ringing sea who spoke to my soul even long after my footprints in the sand were gone
Heard and that day witnessed with bare eyes," the sea gives back whatever dear we lose
The lost precious moments, the platonic healing sight of dedication, self-beings in refined forms,"
That's the ringing sea, where the castles made of sand fell to intermingle to set it free to loose it's entity to none.

This poem is about:
Our world
Poetry Terms Demonstrated:
Connotation

Excellent. Your idea and flow of words is simply stunning

Glad to have applaud!