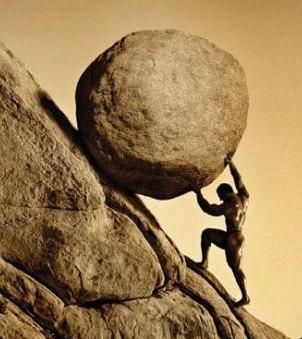 Night confronted her adversary,
intrepid,
a face of darkness dancing among the stars that brightened it.
There he stood,
undaunted,
head blazing with the fires of Hell.
Commencing words slithered through the air:
Es gibt nichts, und ich bereue nichts.
No longer teetering on the edge of sanity
as these few words ignited the whole of eternity.

Heads pounded and hearts fluttered amidst the confusing supernova of
existence and non- existence,
balance upset.
Screams erupted from the pits of hell and
bells tolled in the distance,
shattering the shield of perception.
All bearings,
all hope,
all sense,
lost.

From the sky dripped tears of redemption,
coating the destroyed with meaning:
a revitalized army of beauty.
From them radiated the light of fulfillment,
enveloping all in its wake.
All too quickly, though,
salvation disappeared alongside transgression
within the profundity of a shallow mind;
the fate of all that humanity had ever known,
dancing on the periphery of conclusion,
reverting back to a cliff of sane uncertainty,
reverting back to a prolonged decision.

Tonight, I danced among the stars,
floated freely among their twinkling insecurities.
From them emanated happiness,
the kind of elation which wholly saturates existence.
Enclosed in the spiral arms of a galaxy's acceptance,
my being accumulates mass from the infinitely large,
though undeniably tiny subatomic particles of innate understanding.
Extracted from me, memories flew by as contrails
of the comets of which I was now independent:
an objective view of subjective entities.
The illusion of distance shattered by the words of liberation,
by the kiss of light which eclipsed
the weight of the world.
The birth of a star,
an addition to the progressive nature of convalescence.
The evanescence of time:
an increment of consolation.
An elusion of the ineluctable,
the emission of happiness from the prison of a singularity,
of the black hole which devours everything.

Tonight I witnessed the impossible:
the melding of one star into another,
the creation of a virtuously beautiful system of unfathomable power.
Space warped around itself,
distorting the existence of ever- present dimensions,
creating one of absolution,
of remission in the cancerous tumor of existence,
of irremediable reality.
Life and death combined into one,
cancelling out individual constituents,
paving the way for absolute being,
paving the way for you and me.
Time screamed to be saved as it languished into the profundity of thought,
devoured by the jaws of reason:
the effect of not learning to let go.
It is the fate that awaits us all.
Cosmic wind rustled the fabric of space,
awakening the violence of history throughout the cosmos.
Stars exploded, galaxies flared, planets disintegrated,
and I was only able to dangle there on the edge of sanity,
marveling at the spectacle before me.

Tonight, I fell through the fissures of faith as everything I once held true fell apart,
disintegrated into the contingents of hereafter;
perception elongated in the face of potential,
adulterated by possibility.

Tonight, my heart shattered as the love which had been imparted upon me,
the verity which had bequeathed my happiness withered like flowers during winter.
Sanity fell from the trees of humanity,
coating the ground with remnants of broken dreams.
The cool, winter air scattered the dwindling corpses throughout the now- violent universe,
and I lay there, beholding the destruction of all that I had ever known.

Tonight, a disclosure of gratuitous, newfangled merriment enclosed my mind,
divulging things never before seen.
Altered perception,
modified emotion,
foreign altogether.
The only solution: to embrace
efflorescence of sanity, blossoming of belonging,
complementing the peacefully overwhelming windlessness
of a night everlasting.
An upturned smile,
the vitality in a touch,
the solace in a voice of unremitting beauty elicited a state of inexplicable ubiquity,
an omnipresence of reassurance in this unforgiving encasement.

Tonight, I met you.
Yes, tonight, I held you.
And that was all that was necessary to thaw the iceberg of an entity
that I had become.