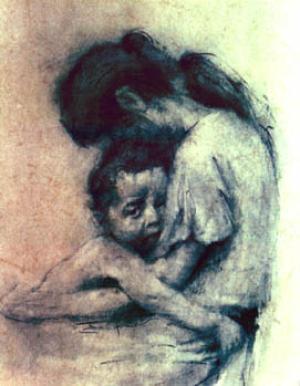 Ten year old boy holds his mother tight to his chest
as she once held him.
Now he protects her as best a boy can,
knowing only the unknown.
His over sized shirt stained with his mother's tears
mouth memories, the smells of sweat,
combined with the acidity of stale cigarettes,
and splashed with vinegar wine.
He does not leave her in this state of uninhibited grief,
remorse, this dark place,
for if he was ever trapped there
in darkness and dispare,
he hoped someone would cradle him and hold his hope.

Sometimes their interwoven denial would last into the early morning,
time did not separate the sons pleading eyes.
With his mother's vacant hollow gaze
she never heard her own words spoken aloud,
words that would shock anyone wild,
especially her favorite child.

Holding her soft face in his palms,
he would look up at the universe
and ask from the depths of his stomach,
that his mother would someday find her elusive smile
knowing in his depths that someday she would leave him.

Guide that inspired this poem:
Suicide Awareness and Prevention

Aaron's mother passed away this summer from a severe case of unacknowledged and untreated depression. Janet has become my muse as I have written a poem a day since she took her life. Writing has helped me, as well as her son recover and adapt our lives around her absence. It felt very good to write this poem, for mother and son.