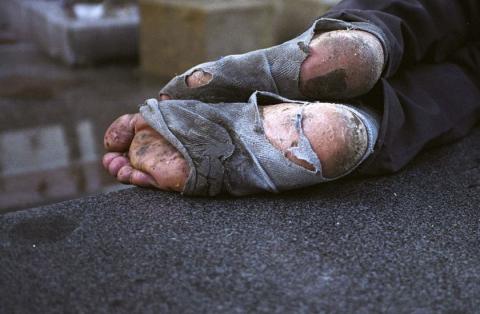 See the people in the streets, barely any clothes on their backs and no shoes on their feet.

They have nothing but empty bottle packs

You see... we've upgraded from the minted coins to the paper dollars

Walking around with painstaking loans

You walk by them with out any recognition, fixing your collars

You see, we've gotten so used to breathing this air

Air of corruption and pollution

But don't you think it's unfair?

Unfair enough, that the governments only solution is to take more to help the welfare of another country?

But why not us? Our own home

Fight for our individuality because we are very bright

You see? Those people in the street with no shoes on their feet

And their backs Raw and Bare

They ALL believe that with time their death will soon near.

But don't you see? WE are the ones who made them addicted to drugs and alcohol

And rose the pain in paying taxes

the kids we see in the street? The ones we say are juveniles and delinquents?

Getting high off of marijuana

They didn't choose the "thug" life, nor vice versa

We brought it upon them with Lil' Wayne and  Justin Beiber

In the fourth grade my generation took a test...

You know what happened if you failed?

We are labeled as society's laze, failed generation

But wasn't it past generations that made us this way?

We had no one to greet and no one to meet just people to beat coming to the "New Country" And blaming us for their country's problems?

Haven't we all been there?

You see, we wrap ourselves in the "American Dream" which gets torn at the seam in our imagination

We plague the innocent with lung disease and asthma because of the green goop WE created!

Their eyes trying to find what society used to be