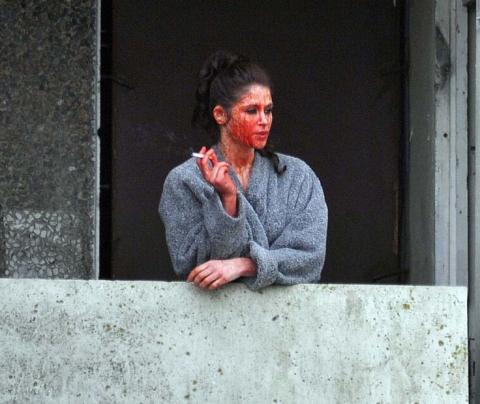 I know I haven't written

In a while, but I'm getting in that mood again

And can't stop thinking about what happened

So I'll do this to get it out my mind.

And I hope I just stop crying.

And I just hope it doesn't snow in San Diego.

The layer of cold rain fell

But was stuck together

Clumped just as dirt does

When molded by hand.

Frostbitten by the brisk winter day,

I described how this fluff of snow

Floated down to the Earth

Flowing with the wind in my

Journal, but that was the past.

The Western gust we're accompanied by

Breathing in the wisps

Of the melancholy climate the

San Diego winter has brought us.

Staring off into the sunrise is my mother

On the balcony of this hotel

We can only afford because of the

Discount thrown at us.

Just given up hiding her strategies of

Aquiring what she wants due to the

Maybe it's because my admiration of

That I don't speak up.

I'm too meek, too cheerful

From the fresh imprint Christmas has left on me.

Or maybe I just haven't adapted back into the

21st century. that I, of all people, have stooped

My social integration skills down to those of

A Viking of the Middle Ages for comparison,

Although it's the ones who have raised me

That duel as savages do.

Yet another screaming match unveils itself

Which was expected from the big

Man from which his property was stolen from him.

I'm sure that's all he sees in me.

He beats her that way, and I'm sure

My burning brand will be soon enough

If we travel back to that dungeon of

Foreboding that man calls his domain.

For now I hope my mother stands with her descion,

Made as she saw the burning bush,

Just as I see her describe

How painful a flame can burn to him, without even touching it.

Well imagine him say through exaggeration and ignorance.

For I can hear the niceties of his words

Through the true grit of his teeth.

And the focused touch of her bosom.

And the convincing cry his eyes portray.

And the scar which wraps his right knuckle

In a deciptive type of sorrow from when

A driving jab drove my mother miles away

In a broken down, beat up car.

I see it, just as I saw the day it happen.

Yet I can tell these words will hurt more than

The pain any physical force can.

"Jessica, me and your mother may be going through

Some tough times, but I swear we're working everything out

Just as adults do, alright honey? This will never happen

Again." He says. His word slither from his throat.

More woe proturdes from the moment

As my mother tipsily speaks.

"Yeah baby, he won't hurt me again, Rob is a good man, he's gonna be taking us out to eat

Then we'll be on our way back to idaho! Doesn't that sound alright?"

She drinks when she smokes, and she's been smoking

A lot this morning.

I think to myself that it's still snowing mid january

In the springs, and no big house can house a driking man

And no fancy watch can move a season.

So I wrote a memoir in the closest to Anglo - Saxon

Literature as perceived to be

Titled "Once Upon A Time In A Paradise of Sunsets"

Before we head back

To the worst ending God could find.

Poetry Slam:
Once Upon a Poem Scholarship Slam - CLOSED
This poem is about:
My community
My country
Our world

DomesticViolence Violence Once Upon a Time once lovenothate peaceandlove APEnglish poetry

77 reads for this poem