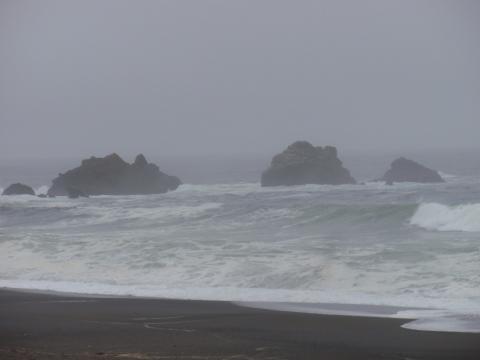 The Ocean and Its Sand

The Pelican was there, I believe, though now long gone.

Still, the heart beats and the mind wanders on.

The early fog has disappeared; feather clouds take its place.

In the tentative light, my idle toes begin to trace

A canyon in the sand, an ocean, a desert;

A mountain arises, flanked by a skirt

Woven by rivulets of seawater, which carve up the sand.

That reached over oceans and sculpted the land,

Flexed the ring finger and crafted a man.

The tiny, rough flecks that make up the sand

Along with the waves, the duo flows in. Eager and fast—

A foggy and excited, yet delicate, mass.

But as the water ebbs, and flows back out to sea,

The sands are left behind, both stranded and free.

Yes, the sands were created by the tide’s constant flow,

But there they remain, watching their Father go,

Into the abyss—nameless, dark, and old—

Just out of reach: Closer than we know.