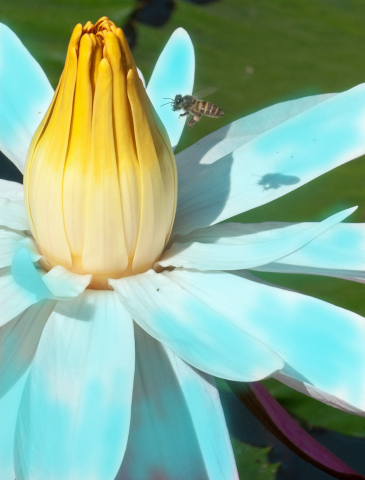 At first she didn’t know what she was...

She thought she was born to be a Rose.

The Lily was wrong,

She was always told, that she was a Rose...,

And always had to remain a Rose

At first she thought she was alone.

She thought Everyone had to be a Rose

One day a bee wanted her nectar

At first she thought it would be over soon

She thought it would make her a better Rose

She wished to disappear

She thought she didn’t belong

She thought she had to hide

At first he didn’t know what he was.

He thought was he was born to be a Wasp

The Bee was wrong,

At first he thought he was alone

He though Everyone had to be a Wasp

One day the bee was ordered to collect nectar

He was always told that it was Normal to want nectar

At first he thought it would be over soon

He thought it would make him a better Wasp

He wished to disappear

He thought he didn’t belong

He thought he had to hide

One day the Lily decided to go out for a walk

She could not, would not last a second more in the Rose bush

She needed to free herself

One day the Bee decided to go out for a flight

He could not, would not last a second more in the Wasp hive

He needed to free himself

On their way, the two meet,

The Lily was frighten

The Bee was startled

The Bee tried to calm the Lily

The Lily fainted and The Bee Caught her

The Bee set The Lily on a leaf

When the Lily woke she was surprised

They looked at each other, confused yet joyed

They didn’t feel so alone anymore

The Bee and the Lily knew they were alike

They agreed to meet once more

Lily became a little more joyful that day, and couldn’t wait to go the next.

She knew she was different from the other Roses

But she knew Bee was different from the other Wasps

Bee became a little more joyful that day, and couldn’t wait to go the next.

He knew he was different from the other Wasps

But he knew Lily was different from the other Roses

After the first reunion, The Lily and the Bee became good friends

At first they weren’t very sure

They were skeptical at first, if they could, if they should, continue to be friends.

Lily and Bee had a secret hideout

A secret hideout No One could find

They learned to trust one another

He went to Lily’s rose bush...

She was packing her pollen and petals into a leaf

One day Lily’s parents found her depetaled with another Lily

They told Lily she was a Rose

"Roses do not share their nectar with another Rose"

Once Bee was told he became Sadden

And promised Lily a message a day

The lily smiled and hugged the bee

And promised Bee a message a day

The bug came back with a message from Bee

Lily wakes up every morning waiting for her message from Bee.

Sometimes a message may take seconds and other times it may take days,

However when it finally comes, Lily becomes excited and read its at once

She knew what she was thanks to bee...

At first she didn’t know what she was

She thought she was born to be a Rose

But thanks to a Bee she knew what she really was.

Nothing compares to the feeling Lily and Bee share

A feeling a Lily can have for another Lily

A feeling a Bee can have for another Bee

And now she counts the days until she can her friend and Lily once more.

Poetry Slam:
Greet the Day Scholarship Slam - CLOSED
This poem is about:
Me