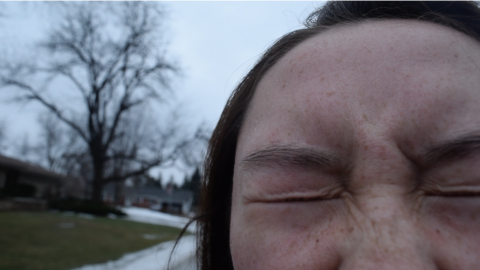 I didn’t blink for an entire year.

I taped my eyelids to my brows and suffered so that

My sixteenth year wouldn’t be in vain.

Staring at the backs of your eyelids,

Which feels to me like an enormous and crippling

So I didn’t blink until I

Forgot the color of the backs of my eyelids and

Even then, I refused to let my lashes meet.

(The kind you only find in public high schools or prisons)

I found my eyes welling up with the sheer effort.

Winds blew across my corneas, I felt their sharp sting as my eyes dried

But still I did not blink.

I found myself staring into the eyes of two children who live in a small, third-world country--

For a donation of nineteen ninety five, please, to save them--

But my eyes skirted away of their own volition,

Like an obedient dog breaks its gaze with humans because

It knows they are its master.

When it got quiet, at night,

Until I learned to see right through myself.

Nestled between them was my compassion, my ease,

My pushover tendencies, my forgetfulness.

In vain, I looked for a way to separate them,

(take the good and only the good)

But it appeared there was a vast network of tissues that I couldn’t quite untangle.

I have eyes, not medical degrees,

So I left them.

My eyes rolled untethered in their sockets,

Glazed and unfeeling, they witnessed leaves fall over a world I didn’t recognize.

My brain reveled in the white noise, blind to everything,

Which is why, when I met that boy,

All I noticed was his easy smile and his curly hair

And his butt in those navy blue pants that cuffed above his ankle, not how

He spent more time watching the backs of his eyelids than he did watching me.

One day, when we were on a walk, he blinked

And I ran as fast as I could to see how far I could get before he opened his eyes.

Turns out I got to New Years’ Eve.

I found myself at a party,

With their lids hanging low over their pupils,

So low that their lashes brushed against each other.

And I drove home blearily,

Headlights blurring in my rearview mirror,

And somehow I ended up in my bed

So that even as everything started to narrow,

On the backs of my surprisingly dark eyelids.