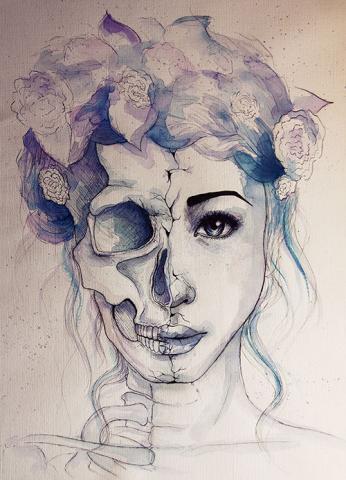 Looking at the mirror what do I see a MONSTER.  A person so evil, hopeless, hateful,thoughtless, and weak. A person with a mask she reveal only though the nightmares that creeps though her mind. She cries out fire though ice that melts the world under her that drops her underneath the cold icy water freezing her soul ice cold, but was it already cold makes it hard core. What am I.

I whispered though the silences that even my words were invisible. What am I. I yelled who am I only the mirror broken though the unfixed pieces there was me. It was me though the cracks of a broken mirror. The brokenhearted person that showed me reality of a unfit person.

Who was to broken to fix only the solution to fix others. What happened to the image I wanted to see. What happened to my secret that made its self known to the world its only been me. No more nights left alone no more times I seat in stillness. What happened to the movement . What happen to the noises. I froze with silence that left a mark though me. I lost the image I though I knew and all I ever was a MONSTER. Misunderstood ,misjudged, disliked ,and alone. A monster unwanted just because my outside image blacken though the blood that stopped . A person alive but wasn't living. A person here but wasn't meant to be. The  monster you saw was ME !!!

Comment if you liked this poem. Those comments will help make me become a stronger poet and being able to share me emotions though poetry . Thank you so much

I can't put into words right now but these is definitely on of your best piece I can say and you have a lot of them.

This poem explains how I was going through very difficult time and I lost sunshine all I was in the mirror was a monster a person I didn't want to be. I'm so happy you enjoyed the poem. It really express my deepest emotions when I'm sad or mad. :-)check my other poems hopefully they inspire you