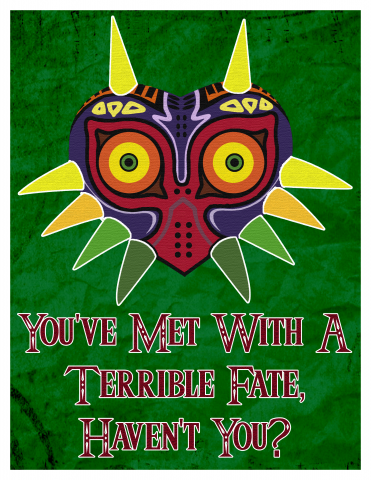 A valiant hero runs through town

As its mayor displays an ugly frown

It was supposed to be a celebration

Instead, everything became damnation

Above the clock, hovers the moon

With a deadly grin, approaching soon

Everyone can only fend

Up until the time’s end

During its final hours

Looking around as everyone cowers

And who was the man behind this?

The lovers’ oblivious while they kiss

Not a man, but a mask, The Mask

Why does it do this, you ask?

He wants to make a bitter end

Just because he has no friend

The hero’s task is to make ends meet

So the villain can accept his defeat

The Mask is who controls your fate

It decides what you love and what you hate

It attacks the body and the mind

As the clock’s gears continue to grind

So Link marches around with his animal troupe

As the tower bell rings at twelve

The deeper the story will continue to delve

Atop the clock, a battle against time

Where the hero plays a melodious chime

Giants, The North, The South, The East, The West

Have traveled far to empower the best.

As the moon consumes the mask

Link prepares for his final task

Ahead of Link, a boy sits by a tree

Now the two children go ahead and play,

Which will render light to a brand new day

The child who bears several masks

Has undergone many trials and tasks

A deity and a devil do their dance

In the end, good will prevail

Leaving evil doomed, only to fail

The battle has been won, let the celebration start

Only the true hero can mend a broken heart.

To the skull kid, a hand he lends

On the Dawn of a New Day, the two become friends.