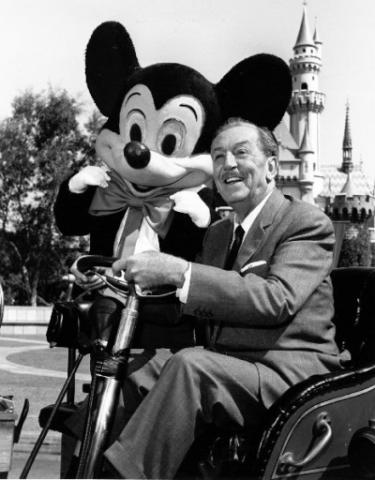 Everyone knows the story of the man and the mouse

His famous stories flood through every house

However many do not know the truth

About this successful man's youth

He barely made enough money to stay afloat

Until he created a story about a mouse in a boat

This man gave the mouse his own band

And in return the mouse gave the man a land

It was named after him

Until it was filled to the brim

So he went to the other shore

Whether world or land

Everyone knew of the mouse and the man

Whose friendship had always shown

Even when their wealth and fame had grown

Now with this mouse

He left his house

As he flew through the air

He never forgot what got him there

The mouse that taught everyone to be young again

Would always be his most trusted friend

He never let it go to his head

As he granted children's dreams while they slept in their beds

He reminded others never to forgot who they are

As he became the biggest star

Even with all the loot

He remembered his true roots

Hoping to help the next generation

He listened to their new creations

Until the day he died he loved Mickey Mouse

He thanked him for everything down to his old, rusty house

Throughout his life he had stayed very busy

And the world will never forget Walt Disney!

This poem is very moving. Good job keeping one theme (Walt Disney's relationship to Mickey Mouse) throughout the poem. I have a hard time with that with big topics (like Walt Disney's life).

This is an amazing poem! It's well structured and easy to read! Very enjoyable!

History lesson in a fun way!

Thank you all so much!! I am so happy that my writing is loved by others because it is my passion and makes me happy! ☺

This poem is well written!  It reminds us all that we can achieve anything if we believe in ourselves and our dreams just as Walt Disney did.  Dream big!  Great job!

Such innocences and tender love is visible in your writing! Great concept that was an easy read filled with information and imagery!  Kept writing girl!

good job love how you kept it focused.

Thank you all so much

One of the first times I actually enjoyed poetry

what a great poem good luck!

Words are gifts and your words warm a cold rainy heart and bring a smile on a grown up adults face.  Never give up on your dreams! If writing is your passion don't stop till you go to infinity and beyond!

I enjoyed how you found a way to make it enjoyable, easy, and entertaining!

I love the title for sure and I do like the way you incorporate Mickey's and Disney's relationship and how important it was regardless of the hardships and the fame.

Thank you all so much!

If you like this poem be sure to check out my new work 'I'll try to save you'.