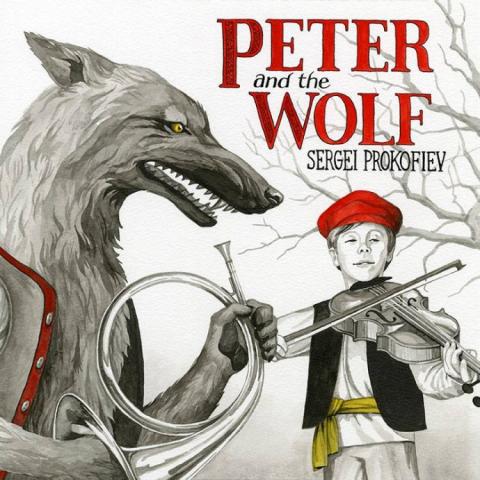 The sound of growling crawls its way from

The dark of the forest, accompanied by

Faint, weak cries of hunger. A mother sets forth.

“There is no more time. With nearly

A week and a half gone by

I must find food for these pups of mine.”

Unbeknownst to the mother,

Her eldest pup followed far behind.

Despite warnings of danger

From a mother always so wary.

It was still dim within the dense forest,

But the sun shone bright in a clearing

The mother happened upon.

Though next to a human abode,

Its humans had just entered the house

Leaving a duck, a cat, and a bird outside alone.

Treading lightly over the green grass,

Once she reached the clearing.

From there she’d have to rely

On her agility and expertise

To guide her to a successful hunt.

The mother rounded the clearing

And aimed to ambush the duck,

For the songbird was too small and fickle

And the cat too furry and its claws too bothersome;

But the duck was plump and fat.

With a burst of fierce strength and speed

Shot forth from her safety and shred safety

From the flustered duck as his startled companions

Shot up the nearby tree to their own safety.

Content in her success of finding food for her pups

For now, Lupus’ mother trotted away with the duck,

Exiting the clearing and entering the dark shadow

Of the tall forest trees that sheltered her and her pups.

All of this Lupus and the human boy looked upon:

One with mesmerization, the other with horror.

He knew what Mother would say about

The danger of showing yourself to the

But Lupus paid no attention to his mother’s words.

The fat cat and the small bird. Mother had finished

Her hunt; and he’d head back home in a while.

But first, he wanted to play some! This was his

First time so far away from the den. And so,

Lupus went up to the tree where the cat and bird were.

Onto the wall near the tree with a rope in hand.

The boy didn’t notice the difference in size

Of this wolf and the one who’d taken his duck.

So blind was his hatred and fury, he knew only that

He wished to capture this greedy wolf looking for more.

In time, the songbird flew down to Lupus and

Flitted about his head. This was the first friend

He’d made! How exciting! Lupus was happy

That he could play with someone new now.

But he was quick to learn that the bird was

No friend of his, but of the boy.

He felt something tighten around the base

Of his tail to the point of pain. The boy

Celebrated in his triumph of having caught the

Horrid predator with innocent blood on his teeth.

Lupus thought it was time to go home and

Tried with all his might to leave, but to no avail.

The more he pulled, the more it hurt. And soon enough,

The sound of hunters’ bugles and shotguns

Surrounded the clearing. They pulled in,

The scared pup, not yet six moons old, crying

For his mother and for his life.

Twitched as she heard the wails of her Lupus.

She who had been hurrying away from the

Sound of the hunters, turned tail and sprinted

Towards the clearing from which she heard

The frightening sounds that she prayed were trickery

Upon her ears. But she confirmed that this was

Not so when she looked upon the ghastly scene

Before her. Lupus, bound and tied, was being

Dragged behind a procession of human hunters.

Silently, she followed astride, unsure if she

Could save her child from such a horrible fate.

Ropes digging into him, Lupus continuously

Cried as the hunters jeered----desperate to go back

Uncertainty and fear overwhelmed his senses;

These people were not his friends and he

Knew not where they were taking him.

Amid his hysteria, Lupus caught the scent of

His mother and swivelled his head towards her

Direction. He looked her way and gave a mournful

Last howl expressing his sorrow and his apology

For being the foolish pup he is and letting

“I’m sorry Mother. I should have listened to you.

Resigned to his consequences, he bowed his head

And followed the hunters and the boy as they neared

The human town to whatever fate lay before him.

The melancholy sound of a lone howl caused all the

Humans of the town to look towards the forest nervously.

The mother responded in her infinite sorrow.

The sound of her howl piercing the day and

As she declared her loss and her enmity towards the town.

As the sands of time relentlessly slip

Between the fingers of all who hold it.

As life continued on, whether good or bad,

All in that one frozen moment of grief

Contemplated the cruel reality of this world.

Once upon a time:

Whatever god that made me so,

Made it so that to survive,

The same from others.

Is this such a crime?

Poetry Slam:
Once Upon a Poem Scholarship Slam - CLOSED
This poem is about:
Me
My community
My country
Our world
Poetry Terms Demonstrated:
Stanza