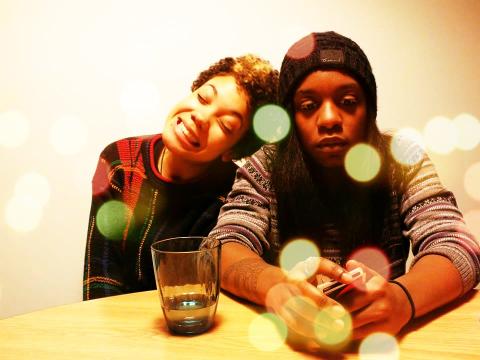 When people told me being black was a form of inferiority
I wanted to hate white people,
I wanted to tear apart my own brown bones,
Spreading through the clatter of mismatched words,
And unclaimed, dusted culture,
To the double Dutch roped, soul food,
Gospel musiced, big hands, and tattooed sculptures of another place.
When people told me being gay was wrong,
I wanted to hate straight people,
I wanted to go to the big city,
Feel the flow of people moving their bodies,
Forget where I was,
Know that the skin was a delectable fruit
That could peel so easily when wet,
Find her alone in a crowded room,
And kiss her,
Love her in more ways than she could imagine

Look at me and you will see the same skin
That I stared at for nineteen years,
Dark ripples on a small body
But you will not see
the vibrant bright blue eyes
Of those curly haired infants,
Mixed children
Our names were often flushed around lips
Of family members who never wanted to see us
That had never wanted to see me
Black girl
There were envelopes sealed with lips
That had never met my forehead,
Pens that scratched paper with flurried hands,
I had never held in mine—
That had never touched each other
Over saying grace for fear of the colors mixing
They sent us our occasional birthday cards
So our pain would evaporate
We were preppy comic sans print hiding
Their fearful eyes
They created anniversaries for the times we
Did not spend together

When I was younger
Small children ritualized the word “retard,”
Until it became a dull hum to the drag racing
Start of bus engines and I didn't stop it,
I didn't shout out against it
My kid brother was fragments and bruises
He was pieces broken people feel
When they fall to bits
And I just listened.
I just played back the recordings.

Look at me and you will see a girl
Who danced with a boy at Christmas,
The halo of snow falling down around our faces,
Jazz slowing our heartbeats,
Conducting our movements as though they were not our own,
But part of an orchestra,
A body movement that connected one limb to another
But you will not see a girl
Who tried her hardest to hide her grin
When little Anna could tie a cherry stem
Into a red, Christmas bow,
Pulling me over the couch
Until our eyes were laughing,
Until our bones were laughing,
Down to a special kind of sickness

I am still down to a special kind of sickness
Pull my body from the underbrush,
And I will be a fugitive,
Filthy and unwanted,
But know this,
I have loved nearly every single person
I have ever come in contact with.
There is a temperature for love
In every human person
But I want to tear apart my own brown bones
And forget where I am, what I am.

I hate those vibrant bright blues,
That black curly hair,
Our colors mixing,
The awkward quick step of dancing at Christmas,
Cherry stems, big hands, big cities,
Delectable skin, envelopes sealed with lips,
Fingers that I will never touch but am related to,
Girls that look like me but won't look at me,
Boys that act like me but act against me,
Black and white.

Look at me and you will see a girl who is doing okay,
But you will not see the girl who has been falling apart
Since she was eight years old and twenty some odd days,
Old enough to read the fine print,
To finally see it all in highest bit of Technicolor
But no one to watch the channels with

Guide that inspired this poem:
Step Up and Slam!