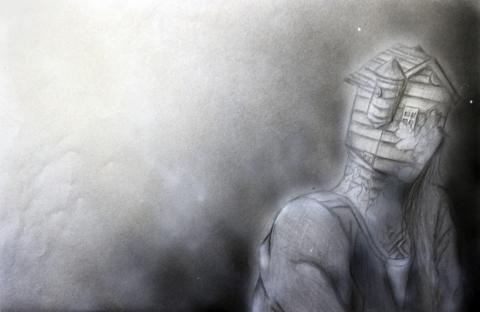 Psychotic. Thrown from mouth to mouth.

Casting away a pasture of peace and norm

For something truly catastrophic.

But once this reality blows the Sun out.

Horizons becomes so inky with the glacial breath of night.

Mirroring perfect circumstances but in a mismatch fashion.

Funny,- psychosis leaves you crawling on your knees for a taste

of what it’s like to bear the burden of a daily routine.

Having no paranoia nor impending doom as a constant side with

Controlling what your future is destined to be instead of a statistic.

To be placed among the life style of the forgotten,

The scattered nooks and crannies among the city scape

with the murmurs of  should have, could of, would have.

Coaxing with the false notion that escaping is a possibility.

That door of scourge-

Maybe one day this contradiction will crumble,

but now it's only decorated with the composition of wishful thoughts.

Poetry Slam:
I Am... Scholarship Slam - CLOSED
This poem is about:
Me
Poetry Terms Demonstrated:
Imagery