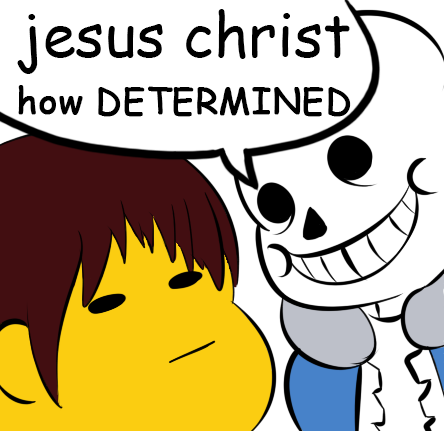 (Idea for the name of this poem and the characters in the picture are from the videogame Undertale by Toby Fox.)

So, the situation is this:
I'm stuck on a deserted island, and I have the things I might need to survive.

Think about it. Without determination, nobody would be anywhere.

America wouldn't have successfully broken away from England.

The Industrial Revolution wouldn't have happened.

Humanity itself wouldn't be around.

Determination, in the dictionary, is firmness of purpose; resoluteness.
Also known as willpower, strength of character, resolve. Some would call it stubbornness.

If I were stuck on an island, regardless of what physical materials I have, I'd be nowhere without determination.

I've often been told that I'm a stubborn person, and I take that comment as a compliment.

In a literal sense, I need determination to keep going.

If I didn't have that, I would just give up, lay down, and die. I wouldn't last very long on an island without it.

Determination isn't something that you could get at the store.

It's not something you could steal from someone else in the case of the apocalypse and you're scrambling for supplies.

Even if you had nothing else with you on that island, if you have determination, then you could survive.

And I want to thrive.

All I Need Scholarship Slam All I Need Determination