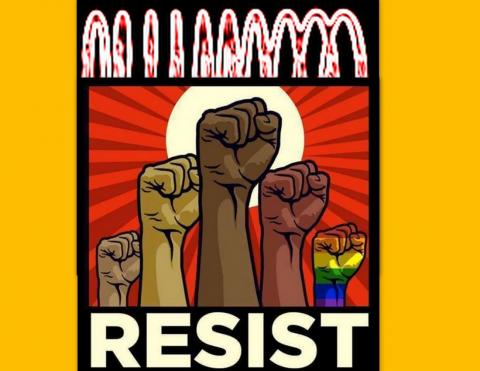 The Irony in Having the Name “Hope”

My name is Hope and I may be white

But that does not mean that I am blind

To the hate received by every other color and ethnicity

In my country, in my America

That does not mean that I don’t see

The innocent black man falling to the ground

While he was just trying to sell CD’s

So that he could support his babies

That does not mean that my heart doesn’t ache

Every time we learn about the Trail of Tears

And the pain and suffering felt by the Native Americans

As my ancestors killed them

And pushed them from their homes

That does not mean I do not cry

As I read about the children and citizens of Syria

And the blood. So much blood for such a small child

That does not mean I don’t feel terror

Every time I attend a speech and debate tournament

With my friend who wears a hijab

As angry white men sneer and poke fun at her

Because in regards to the majority of the world

I have lost so much of it

Every day I witness things that cause me

To lose more and more

Making it difficult to gain any back

As I watch the flourish of his pen

As he signs the “Not-A-Muslim-Ban” Muslim Ban

As I watch white boys walk away from a court hearing

While the girl sits inside with her family

Shaking and crying in fear

Fear that he will find her and finish what he started

Behind the dumpster, in the public bathroom, at her school

Because I, and everyone else, know that

If that had been a black or Hispanic man

He would’ve been sentenced to years in prison

As I watch my own family victim blame rape survivors

While I sit uncomfortably, listening, not saying a word

For I know that if I do, I myself will be ridiculed

So I keep my mouth shut hoping they’ll stop soon

As I watch the media ignore how Maya Angelou

Is the nation’s top banned author

Because she wrote about rape and teen pregnancy and racism

All things that are highly common in today’s society

So why can’t we talk about it?

Why is it such a sensitive subject?

Because it contains the N-word

Seem to find that word hilarious

I continue to lose hope every day

But there are things that gain it back

While it is raining and offer them his coat and coffee

Handing the woman a bag of groceries and dog food

As I watch a man step in front of a stranger

Who is getting beaten to the ground

Protecting this man he’s never met from their kicks

The irony in having the name “Hope”

Is that when it comes to the world and society

It gets harder and harder to hold onto it

I know I must though in order to make a change

So I, Hope, a white, Christian, cisgender female in America

Will stand by those who aren’t

I will stand by black, Hispanic, Indian, Middle Eastern men and women

I will stand by gays, transgenders, asexuals, nonbinaries, and bisexuals

I will stand by Christians, Hindus, Muslims, Buddhists, Sikhs

I will protect them with my life if I must

Because we are all human and as humans

We protect one another

Or rather we’re supposed to

The irony in having the name “Hope”

This poem is about:
Me
My community
My country
Our world
Guide that inspired this poem:
Create a poem about inequality.
Poetry Terms Demonstrated:
Repetition

Hope, this is absolutely amazing. You have such a strong voice in this poem. I will stand with you. You are right about the injustice.