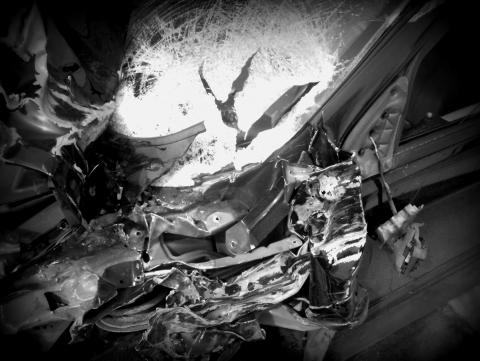 Man I’ve been studying all week and haven’t had a break
I need some fun and a night out to keep me awake.
Instead of the club I go to the gym
Then I get a text from him.
He won’t be able to talk on the phone tonight
Says hes going out with the boys for a bite.
Ding ding new text.
Why’d I bring my phone in the rec?
Its my coworker inviting me out for a drink
As stressed as I’ve been I tell her what do you think?
I hop in the car and meet her at the bar
Hours later its gotten colder and colder
I should have waited until I got sober.
But it was later than anticipated
And my mind got fluxuated.
I missed my bed and wanted to lay my head.
Everyone else was driving home
So I headed back alone.
Theres no lights on this street
Let me turn off the radio and pull up my seat.
Staring at the lights in front of me it looks like something falls from the sky
But its really a truck with a guy.
I break as hard as I can
Saying my prayers because I know it’s the end.
Crash, crunch, bang.
Wow Im still in this thing.
Please tell me hes not dead,
Alright hes okay that’s what he said.
Hands me his phone but I remember no numbers
Im so remorseful for this serious blunder.
My car is totaled and here come the cops,
Now my heart really stops.
The ten dollars I spent on drinks that night wasn’t worth anyones life.
The girl studying criminal justice is getting first hand experience,
Except this time its way more serious.
As I sat in jail
I cried and wailed.
So disappointed in myself at a loss for words,
Theres my mom, im not ready to look anyone in the face, let alone hers.
Because a fun night out became my worst choice ever,
In fact it could of cost someone forever.
Like the man in his truck and his family at home,
Because some girl was busy thinking about herself alone.
Someone could have painfully planned a funeral
And the tears I cry in court would be nothing to my moms innumerable.
To die yourself or be sent away,
These are the prices you pay
When you have a couple drinks, gamble and decide
to go ahead and get in your ride.