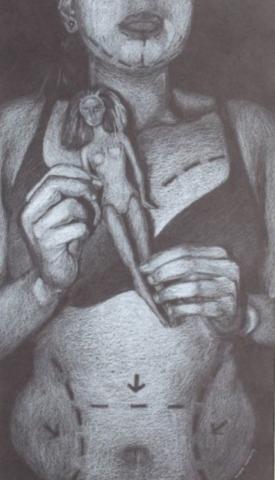 Mirror mirror on the wall

What will be the death of us all?

She sat there making judgment of who is most fair

Where dreams come true, she lived a nightmare

She began to compete to try and look the best

She didn't realize she began to look like the rest

She continued to ask the mirror

Am I the fairest of them all?

Or must I be white as snow ?

A plastic Barbie from head to toe ?

Should I get skinner ?

Am I not pretty enough ?

She was an insecure queen

A diamond in the rough

With time she aged something she couldn't embrace

White hairs and wrinkles she wanted to erase

All the different images she couldn't portray

A game by society she could not play

A mirror is a reflection of you my dear

Your image is not one you should look at and fear

No one is fairest it's about what's on the inside

A queen who only in her reflection could confide

And that's a lesson that took her long to learn

For an unrealistic body image she would yearn

In a garden of roses she was just a fern

Competition between girls in the kingdom was proof of values lost

Like clothes on a rack they had a price and label

A system that took a spin on the mortality table

And so the queen began drowning in a dangerous tide

She stared at the mirror and endlessly cried

There was an empty void in her heart

She failed to see the body of a women was art

Painted and shaped in different ways

The beauty of brains that would bloom into a maze

She still had Red rose lips

Curves that will drive someone insane

Overlooked by those in vain

Because of the hate Snow White could not lead

With every slashing label her heart would bleed

Women should not be portrayed like items to sell

A loose thread in the fabric

Poetry Slam:
Once Upon a Poem Scholarship Slam - CLOSED
This poem is about:
Me
My community
My country
Our world

This is not my original drawing, but it is the inspiration behind my poem. I wanted the poem to convey the message that people don't have to look or become a certian way to be considered beautiful. Many fairytales fail to portray that and it is a large issue in our society. I hope that through this poem I can be a voice for others.