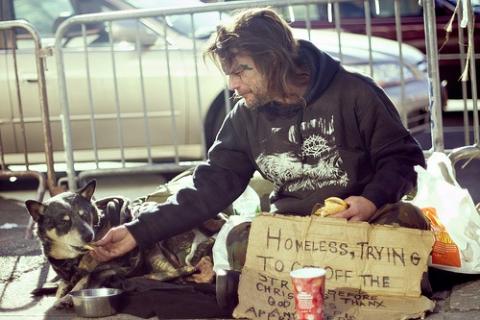 You know when you're in the car
Driving down the same street to the same place
To work, school, or home
And then you see him
You look away guiltily, you think,
"God, what can I do?"
You don't have a lot of money, but you have some
So it's too late as that selfish feeling settles in your chest
But what can you do, you're only human
A few dollars won't help him in the end will it?
Regardless your heart cringes at the thought of him
So you look back
He's still there
Holding the same sign, standing on the same corner,
With that same, vacant look in his eyes
Advertising his hopelessness for the whole world to see.
Holes in his jeans and a tattered toboggan.
An over-large sweatshirt covered in nameless stains.
A cart lies next to him
Holding a garbage bag full of nameless things.
"God, what can I do?"
Slowly he pulls out of sight
And in that last moment you look and see
A skinny thing of a dog lying at his feet.
Why?
Why would an animal,
A thoughtless pet only concerned about bones and meat
Stay with someone who can barely provide for himself?
Is it more loving then me somehow?
I bet that dog would die,
Still staying by the side of that man
How could a dog be like Him,
More than someone made in His image?
"God, what if I were a dog,
What if we were all dogs?"
Poetry Slam:
One Job...May Change My Life Scholarship Slam - CLOSED