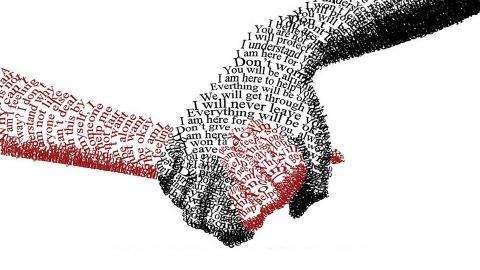 I should start by saying I'm an only child. Always was, always will be.

However, my cousin, my blood, my aunt's daughter, is nothing short of a beautiful miracle.

A glorious light with pretty big blue-green eyes that would put mother nature to shame and lashes so wonderfully long that her eyebrows are the punctuation needed to end that run-on.

Her smooth voice always whispered comfort, breath like a welcome gust sailing through my mind and her love for acoustic guitar stunning me every time it quieted her cries.

This I know, and even to other family members it was obvious: Jasmina was my sister.

Granted, I didn't have the sister in the traditional sense and when I told others what she was to me, all I'd receive in response were confused stares and then laughter; their speech slow as if I couldn't understand them while they spit out the words, "She's your cousin, not your sister."

As if the title of "sister" could only be given to those with a closer relation than blood. As if, just because I'm an only child, I don't deserve to call someone by the name of "sister".

I ignored them and continued on. And then, a few years later, they changed the game up a bit.

Jasmina was no longer given the name of my "cousin".

It was much worse than that.

A word that I didn't understand and I could bet not all of them did either.

But a word that made some adults shy away.

A word that cloaked itself under other meanings but was used in the same way a bowling ball is meant to knock down pins; a word that when used in reference to my cousin, made my aunt break down in a sea of tears I couldn't figure out how to sail on.

I wanted to know what it was and why I felt it in my heart of hearts that it was something that should be erased from the existence of this world.

And so one warm summer evening while we're all gathered together, I remember to ask my mom. And I will never forget the pinched look on her face as the question of, "Mom, what does retarded mean?" slipped past my lips like ignorant, slithering snakes that don't know their purpose but still attack to kill.

I had never been so angry in my life.

Let me just say that "retard" is not a label you can stick on people that can't even stand up for themselves to admit they hate the word.

Understand that my sister is not a verb that means to "delay or hold back in terms of progress, comma, development, comma, or accomplishment". She is not slow, a delay, a set-back. And to whoever put the the definition of "slow or limited in intellectual development" in the Webster Dictionary?

My sister is not someone you can pick apart only to twist and turn her wondrous features into a sentence long definition that suits your disturbed Google define searches.

My sister is not someone for you to stare at as we push her wheelchair down the street just because you think it resembles a juggling act as we're pretending everything is alright while at the same time holding her head carefully as a seizure pounds through her body and we, helpless, muttering prayers under our breath and calling her name even louder than that in hopes that God will help her through one more. One more.

The fear that bubbles up like carbonated drinks after shaking the bottle vigorously even though you were always told that "whatever you do, don't shake it," and it spills over and flows and flows like the water from your eyes as you watch her struggling to get oxygen and you stand there with your sticky fingers, clueless as to what to do now that it's seeped over and out.

"Just rinse your hands," they say.

But I can't wash my hands when even with this viscid substance trailing down my fingers, she's still willing to listen to me play the few chords on guitar that I know.

My sister -- though she can't walk, talk or understand what I'm saying -- deserves a word other than "retarded".

Why not use something that expresses her grip on my hand when she sees me, or the moments she uses me as her pillow and I feel sore for the next few days as a result of not moving so as not to disturb her rest?

But I guess those words are too hard for some to pronounce so they stick to something simple.

I have never wanted to rip a word, a bunch of scribbles and loops, into trillions of unrecognizable pieces.

When you've changed your cousin's diapers even though you're almost the same age, when you at the age of three have already been trained by family to know how to deal with seizures, when you have to hold her shaking body in your helpless arms and pat cool water from the Atlantic that your family crossed to get to America on the back of her neck...

When you have to watch as her mother crushes countless pills into sand to make her swallow with her holy throat in hopes that one day all of this craziness will just stop.

Then come and tell me that you've knocked down all of the pins and you're proud of yourself.

Come announce that after everything you've been through together, it hasn't forged a deeper bond that you can feel quivering like static through your bones.

Come and tell me that you still had the heart -- tell me you could stomach looking that family member in the eye like looking into a mirror of pureness your sinful soul will never reflect correctly -- to tell them that they are a retard.

Tell me you've won this game while I and my calloused fingers finish strumming the last chord on this guitar for someone I know is worth more than you.

2014 to be heard scholarship disability