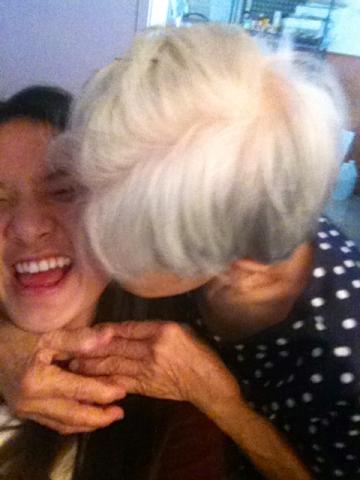 My grandmother showered her fingerprints in the blueprints of my 18-year old life.

On my first week of preschool,

My cries of hysteria were of no match for her loyal ears,

She waited until she could stroll my stroller home.

As I was growing,

My hatred for baths was conquered by her tender hands,

She washed until she saw my eyebrows unfurrow.

When I started to listen to her more,

My perception of love and lost were altered by her stories.

She talked, and talked until I realized that love was not so simple after all.

Yes, she talks to me, but she can’t understand the words I say.

She can’t possibly hear my sympathy in the English I grew up in.

Our communication is broken,

Not by physical distance,

but by the invisible boundary,

the monster of intercultural exchange,

My Cantonese never developed into fluency,

pouring out words I cannot properly convey to her – for her.

They are forced out with a sense of urgency,

waiting to be heard,

to be responded to.

entail lost time searching for the proper articulation of:

How I am doing,

Where the market is,

Leaving me in petty frustration,

just for her to understand me.

Excuse the times I mumbled curses in English

just to spite her.

When her fall ended up with a broken nose,

Her strong demeanor was upheld by my nursing hands,

I tended until she could stand upright again.

As her spine bent into a permanent hunch,

As frailness grows on her,

I can only listen, and listen, so that she could feel less insecure about her ailing complexion

- Complexion that shows signs of

Forced to be strong as a mother of six in the forefront of the Vietnam war,

Worn out from arthritis,

from losing all that she knew to come here.

Still, I pay attention to the love she has given me

She is my glorified grandma, my “maw-maw”

Though the sound of my words mistranslate into lifeless pauses,

My fidelity is pronounced by my obedience.

Our love is felt in the warmth of our arms.

My actions will always be heard.

This is beautiful! It made me cry. Your way with words is amazing. Well done. Keep writing