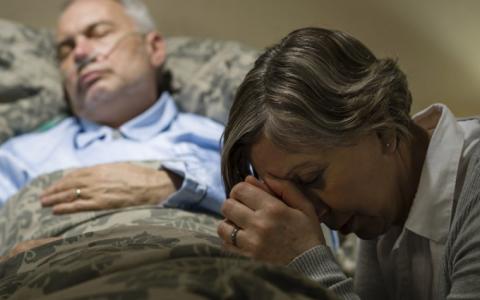 My father has diabetes.

He has for more than 20 years.

And with each passing year I see his middle get larger while his limbs get smaller.

With each passing month I watch him do nothing while this disease eats him alive.

Yet with each passing day I watch him deteriorate.

Diabetes doesn’t have to be fatal, but if you’re not careful it can eat you,

just as it eats my father now.

His limbs are turning black from a lack of oxygen

I have to drive him everywhere because his eyes no longer allow him to see.

A 17 year-old chaperone for her 67 year-old father.

A father who, if he doesn’t change, I fear will be dead within a few years.

But don’t worry, because he’s healthy

But I fear he will not survive long enough to even be wheeled down the aisle and I’m angry.

I’m angry at my father for not doing anything.

For starting fad diets that claim to work miracles

and ignoring what his family has been screaming into his ears for years.

His current fad is a miracle juice.

No change in diet needed, no exercise necessary

Am I the only one who has noticed that these “benefits” sound like a car salesman’s drivel?

Not that it even matters, he doesn’t stick to them anyway.

as he shovels more cookies into the cavern of his mouth.

“I’m much more energetic,” he says

yet sometimes days will pass when I don’t see him because he never emerges from his slumber.

And if he has truly been exercising more, as he claims, then why does a trip to the store knock him out for days?

His oldest is 36, and he doesn’t have grandchildren yet.

He often rambles about wanting them before he dies.

I often worry that he’ll be gone long before they arrive.

But I shouldn’t worry, he says, he’s healthy.

As a senior, college is one of many things on my mind.

When I bring up how to pay for it, my father always has the same response:

“Don’t worry, we’ll either figure it out while I’m alive, or, well, you won’t have to worry about it if I die!”

The money we will get should he die would be enough to pay for my college education.

He brings this up often as if, subconsciously, he knows he will not survive the next few years.

In his mind, that money will make up for leaving us too soon.

An incentive for the mistakes he makes now.

He knows he is dying, but he won’t admit it. To himself or to others.