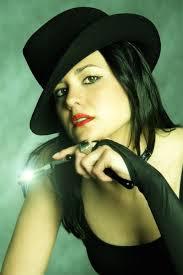 Ahh I can smell that smell from a mile away.

It's that smell of another women's perfume when he's late.

He tries to cover it up with one of those old cigars ,but that never really gets him too far.

I found her silken underwear on the dash.

,but he shut up right quick when I pulled out the gun.

I stood there for moment just listening to him plead

,then I pulled the trigger and watched him start to bleed .

You see there's a lesson for everyone to see.

You just don't go messing with a girl like me.