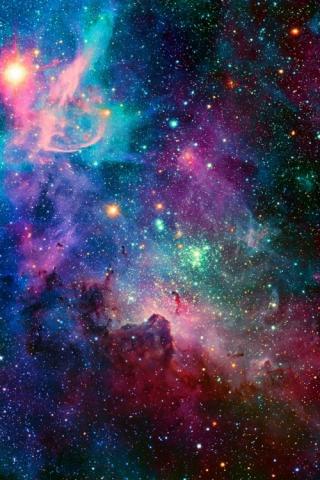 How do I define myself?
I am a galaxy.

Do you know that part of a book
where you’re dragging through
hoping it’ll get better, because you know it’s a good book –
So you wait and hold out for something better to happen?

You know that kitten in the animal shelter?
The one that’s not quite as – delightful – as the others?
She’s just as small, just as affectionate, but somehow
she takes the longest to get picked.

And I’m sure you know that far away, somewhere in space-time,
a million and three light-years away,
there’s this one pocket of forgotten space
with a dimming star and its cluster of orbiting rocks.

Now do you know that a galaxy is defined as
a system of millions of stars, gas, and dust,
held together by gravitational attraction?

Well, my galaxy is defined as semi-delightful kittens
and halfway decent books.
It’s defined as awkward beginnings and beautiful smiles
and that look you give someone after telling them “I love you”.

And it may be a million and three light-years away
but it’s never been so close to me.

Poetry Slam:
I Am... Scholarship Slam - CLOSED
This poem is about:
Me
Guide that inspired this poem:
5 Tips on Spoken Word