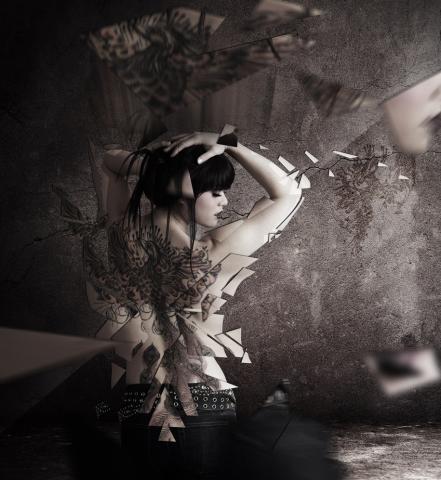 I used to believe once that all humans were strong
That they were all titans that could only fall when pushed to the brink of self mutilation
I used believe once that stories were just tweaked reality and that dreams really do come true
That wishing on a star could grant you anything and Prince Charming could always save you
But when you grow up, you learn that the prince is just a glorified guy with the power of manipulation, the power to see beauty but only on the outside
That the princess is a slave to gender roles
The carriage was always just a rotten pumpkin
And the mice are just an infestation
Just as I learned dreams don't come true, I learned that people are most certainly not indestructible
People are glass ornaments hung from a large Christmas tree
They dangle just above the unforgiving hard wood
Vulnerable to all agitators such as a gust of wind, the flick of a dog's tail, the stomping of the occasional adolescent who didn't get their way
One wrong vibration cascading them down to be shattered by gravity's merciless pull
Atop this tree is the epitome of fragility; a crystal angel
So delicately tossed on gathered branches
With one exhale, she is sent over the edge and has the furthest to fall
She is a ticking time bomb, a grenade without a pin and no way of knowing when the pin was pulled
She peers down upon the other fragile people knowing that some of them will make it alive if they fall just right or if the branches below are generous enough to catch them.
Some have sturdy hooks that promise to never allow them to drop
But the poor unfortunate frostbite princess has no tethers, no safety rope, no bungee cord to jerk her back into existence, back to safe, normal, being
She can only fall into oblivion watching her tears float above her, bracing herself to shatter
But she shattered long before the fall
Reality shattered her hopes, her dreams, her life, her feelings, her beliefs, her ambitions, aspirations, condemnations, reciprocations, her everything
She was no more than left over powder before she ever lost her seat on the peak so her fall feels no different
She is cursed to merge into the cracks of the floorboard or be swept into a dust bin or be thrown into a landfill
There is no hope or future for a crystal angel, only the endless waiting to fall
Poetry Slam:
Speak Your Mind Scholarship Slam -- CLOSED