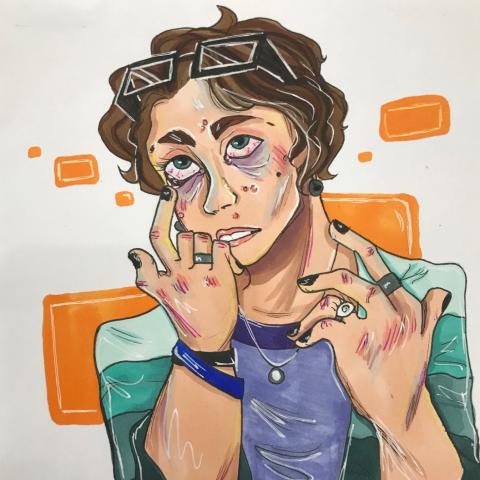 growing was slow, then sudden

leaving a trail of collapsed buildings in its wake-

the only one standing; a tall pillar of salt with the name Piper L. etched in the base-

a statue of someone not yet known, but a thousand years old already.

or the other way around-

accompanied by dull pains in the tibia, the fibula,

and every other bone name i’ve forgot since anatomy.

of a twisting tongue lapping at my newfound curves,

of an eyelid flickering shut,

of pulling on the skin of my stomach, searching for the separation of tissue,

of cellulite and fat.

of teenagers building secret bombs in their basements,

of wondering who would care if they happened to go off.

growing was slow, and then sudden

then watching it misfire into an unsuspecting crowd,

leaving bloodshed and tears in its wake-

the soldier left wondering how he got here, when things went wrong-

when he transformed from a poor chapel boy to a mass murderer,

how much blood was on his hands.

or the other way around-

middle school was when it all went to shit,

when a ghost whispered in my ear that my family didn’t love me,

when i was foolish enough to believe it,

when i learned to keep her safe.

eighth grade was when it all went to shit,

when a bug crawled into my skin and made me promises,

when he cried, i’ll kill myself if you don’t love me back,

when i learned that people can reach through the cage's bars, so a glass box is better.

zach’s death was when it all went to shit,

when i cried for so long my eyes were swollen for the next week,

when i packed my bag for school the next day and pretended like it was nothing,

when i learned third time's the charm! does not apply to returning the human heartbeat,

when i learned that heartbreak can leak through the air holes, so stagnation is safer.

my dad’s car wreck was when it all went to shit,

when i learned he was fine, but wept like he wasn’t,

when i learned that this was a cycle,

when i learned it would repeat,

when i learned that the best thing to do to a beast is to put it down,

growing was slow, then sudden

like blood stemming from a shallow cut on the human forearm,

rising to the surface first,

leaving regret in its wake-

when you realise what you have done,

and more importantly, what it means.

or the other way around,

one crossed line and the whole world goes boom-

made of fissures and gorilla glue,

all that matters is we heal.

or the other way around,

Poetry Slam:
Glow-Up, Grow Up Scholarship Slam — CLOSED
This poem is about:
Me
My family
Poetry Terms Demonstrated:
Repetition