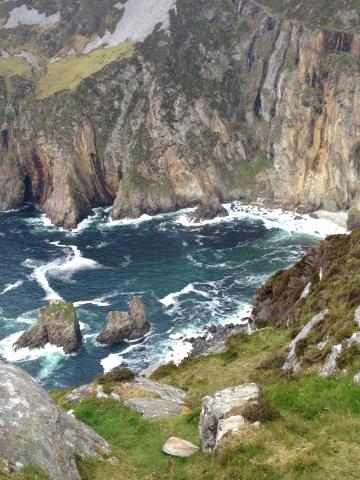 The world is as ugly as it is beautiful,

as evil as it is good,

as cruel as it is kind,

as cold as it is warm,

as dark as it is bright—

but you will always have a choice on which side to take.

There will always be a clear division.

Being raised in an Irish Catholic household, I have been able to see the world through a lens that others have not. In America when the word “segregation” is used, almost everyone automatically thinks of the race issues that plagued our nation for the majority of the nineteen hundreds. Segregation almost always refers to blacks having to sit on the back of the bus, attend separate schools, or drink out of separate water fountains. Although these events mark a very important and tragic part in our American history, I personally have had a very different experience when it comes to the word “segregation”. Segregation makes me think of my family back home in Ireland. I think of the bombings that destroyed Derry and Belfast. I think of Bloody Sunday, the Guildford Four, the Irish Republican Army. Any of that ring a bell? The sad thing is, millions of Americans have not heard of any of the travesties that occurred between the Protestants and Catholics during the mid to late nineteen hundreds. Millions of Americans are not even aware of the fact that Ireland is separated into two completely different countries.

This past summer I saw a very real division; a concrete wall that is present in my homeland of Ireland.  Traveling through the country this past June, I saw a sky-high wall that split the infamous city of Belfast in two. On one side reside the Catholics, the other, the Protestants. Despite the fact that I have seen this wall dozens of times before, this past time was a different experience. For the first time, I was deeply disturbed by the wall. I felt unnerved to no end because this is 2013 and there are still physical barriers present between two dissimilar groups of people. The wall, known as the “peace line,” was originally put up in 1969 following the outbreak of violence that plagued the major city of Belfast. The wall was meant to be temporary and last only six months or so, but proved to be much more permanent. Although at the time the wall was viewed as a good thing, a barrier of safety that would keep the two different religions apart, I now believe it causes more harm than good. The wall emanates the notion that two different religions should be separate and do not have to co-exist, when this is actually a very sad and extremely false reality. The time of troubles is over for Northern Ireland and yet the wall still looms over the cities inhabitants.