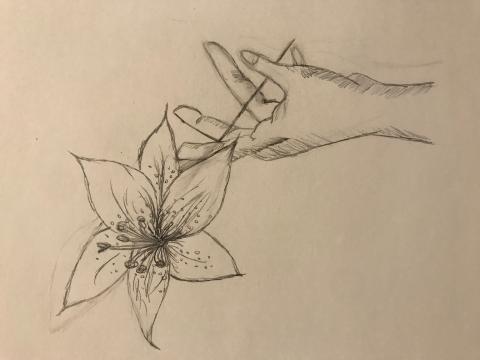 She woke up late, in a place she did not know.

Her eyes opened to an empty sky.

All she felt was melting snow.

She felt she would soon die.

she couldn’t even sigh...

for what she yearned she was bereft.

She couldn’t even cry.

Before her was an empty field,

that seemed to her..

to only be filled

She sat up slow, a fragile being.

One breeze could send her to or fro,

a single needle keep her from seeing.

A breeze shook her as she stood,

this land was deathly chilly.

She pulled on her red stained hood

and with puffy eyes picked up a lily.

The blood ran down the side,

and trickled onto the withered petal.

In this field there was nowhere to hide,

only distortions of the tempoparietal.

When she found what she held,

she fell to her knees.

She let out a scream...but all that came was a wheeze.

She dropped the flower and began to run.

With fractured legs she had little power.

She tripped and desperately search for the sun.

Trying to escape her red-stained flower.

Behind her she heard Them begin to come...

she shrieked a silent scream

and again tried to run...

she wanted to go back to her dream.

But her legs were broken,

Her loudest screams weren’t even spoken,

you can’t run from your head.

With her arms she dragged herself away,

from Them, the haunters that she couldn’t say.

But as she scrambled away and her screams turned to coughs,

her hand met something unusually soft.

She opened her eyes and the field became quiet.

She held something that could finally end her peace-diet.

There in her hand, there was a single white flower blooming.

The single flower of the land that overcame the looming.

and she stared in surprise.

Around her there was still a cold chill,

but there in her hand a new lily would rise.

And so there she was, in a desolate land...

and she woke up opposite when she had planned.

Her legs were broken, her cloak stained red.

Minutes before, she was already dead.

Surrounded by dead flowers, and scary voices, and lies,

she beheld something priceless with her very own eyes.

She cradled the flower, and let out a sigh.

She held onto that lily, with everything that she had.

Many would say that she had gone mad.

Like the blood on her cloak, her tear stains went dry,

and she looked up to see more white flowers dotting the sky.

After finding these friends, she was finally able to speak,

even though her voice was still very bleak.

She looked up to the sky that had become beautifully starry,

and before closing her eyes she managed...