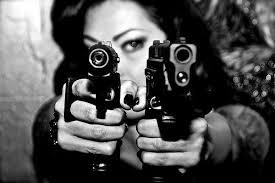 I was only seven when they said id never achieve it.

I was just a girl and Id never achieve it.

I guess I was stupid cause I began to believe it.

As I grew up I realized I had begun to believe it.

It was 2 am and from the cops I was running.

Threw the gun over the fence and I heard the pigs coming.

Money to make cause I had rocks to sell.

Money was owed and I had to pop shells.

Ill never forget the cold feeling of being trapped inside that cell.

I got out 7 years later, and they took me with em’.

I had no goals and I had no ambition.

No morals to live by cause there was no religion.

The judge asked if I differentiated the right from the wrong.

I told him that I had been strapped up to a bomb.

I was sentenced to life in prison, for cracking a joke.

He told me I was a hoe and he was stating facts.

I pulled it out and pointed straight to his back.

It wasn’t my fault I was born with this crack.

I was addicted and I had no knowledge.

Fuck knowledge I hadn’t even made it to college.

The only time I did math was when I broke it down.

Cause they had told me I was born to live down town.

With the prostitutes who feen’ed for the rocks.

I was destined to be one of those that stood on the block.

I wish they were here so they could finally see

How I escaped my personal internal slavery.

I wish they had seen how I took it and ran

Dragging my own soul just to waive a white flag.

If I could change something id change that white flag.

Its not surrender it’s a rebirth of an angel

Crucified making sure that its painful

If I could change anything Id change all the struggles.

If I could I would but its part of the tunnel.

At the end there’s a light and its waiting.

Forget what they say and let them keep hating.

If I could change one thing Id change your perspective.

Id make sure you could take it in and accept it.

Our past is what it is and only you have the power.

Either change it or sit there, and watch it devour.

Let it control your life and watch it devour.

If I could change anything it’d be humanity’s life.

Id change it for the better,and my story tells why.

I wouldnt want this for anyone and god knows why

so lord forgive me for all my wrong, and give these people knowledge and wisdom, strength and ambition.

let them be everything i could have amounted to be.

let them eat the meals i craved so long for.

give them the warmth that those winter nights i went without.

and make sure that when they see this their lives fully change..

i liked your layout of this poem and the story. it was good

@rebel_lionx thankyou so much ! I appreciate the feedback