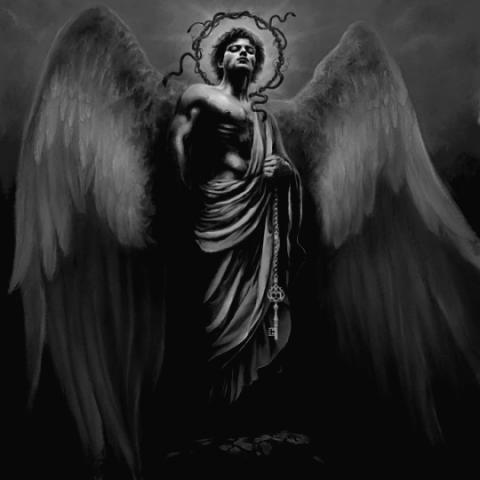 His kind was not meant to dream—no, that gift

Was reserved for others.  Not for him.

But he did dream—horribly vivid, raw

Dreams of blood and triumph and ichor.

His dreams ignited and spread and consumed—

Till there was nothing left but ash.

His lungs burned as if they were filled with ash.

The acrid taste weighed on his tongue—a gift,

A reminder of those he’d consumed.

They would burn, till all that remained was him.

His hands marbled with blood and ichor,

And muscles tense.  By now the ashes

Had settled, mingling with golden ichor.

Silence hung heavy in the air, his gift

Bitter on his tongue as he waited for Him—

The Father, The Tyrant, the All-Consuming.

Waiting, with restlessness he was consumed—

But, when His wrath came, it was not a raw

White-hot flash—instead He sent to him

His Michael, untainted by the ashes.

This was His cruel parody of a gift—

To have his brother’s hands stained by his ichor.

Braced by his brother’s hand, ichor

Seeped from ragged twin wounds as he was consumed

To him and his kind torn off, replaced by raw

Through pain, he prays to a God who has renounced him.

Thrones, Dominions, and Virtues all turn from him.

And blood—down, down, from glory to ash,

By his terrible pride and awful raw

Hope for something better than His twisted gifts.

Pride failed him, and by wrath he was consumed.

With skin stained by ichor and wounds raw,

He waits among the ashes and scorns God’s gifts.

Poetry Slam:
All I Need Scholarship Slam - CLOSED
This poem is about:
Our world
Poetry Terms Demonstrated:
Repetition