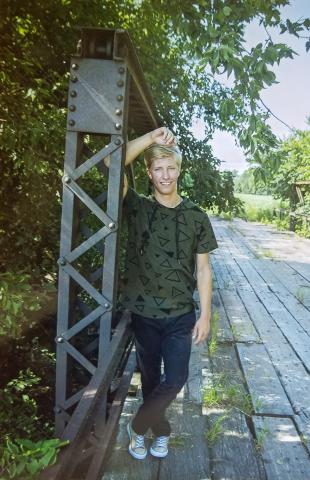 The kid that was the king,It was really quite the thing,He ran about without a doubt that what he was doing was great.Movies raised him and kiddies praised him making him a king,They’d scream and shout for this little sprout making him the king.The king got too big for the small town gig and moved to a place of more promise,What the king knew not is that this new spot would bring beastly blur,With a sinister slur, that blur made him unsure and trapped him in his shell.The king was no longer a king but a shadow passing by saying nothing.He was a chameleon blending in trying not to stick out too much for fear of loosing his skin,And this is how he stayed trapped in the shade, afraid.After many years of hiding from his fears, he stowed away on a ship,The crew was timid and weary, just like him, fearing others rejection might put them in the sea,But a conversation ensued which cued an alliance of minds and hearts.The boy, now a man, loved his band of men and women for a span,But he knew the only way to grow was to face his dark foe and go back home.The man spent two years facing his fears and fighting the prejudice of home,And he finally was able to slay the blur and cure himself of the thing.He never did become king of the new land,He did, however, create a band of men willing to drop a limb for himAnd with or without those men he faced his fears and erased his tears,Making him king of his life again.

have you ever had something great and lost it. You want it back but know you can't get it. so you have to move on and find something better. That is what this poem is about.

'growing up' 'self awerarness' 'confidence'