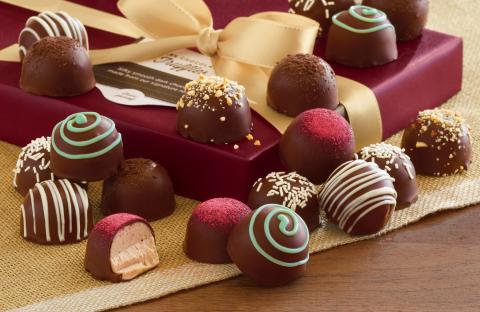 Someone said, “Life is like a box of chocolates. You never know which one you’re going to get.”

But what everyone should understand is chocolate is meant for more.

You see, chocolate is a universal sweet. It’s something everyone has tried to eat.

Now it’s common knowledge that there are many different types of chocolates.

There’s the bitter versus sweet challenge

That rivals against the what’s better; “White or Dark chocolate?”

Personally, I love milk chocolate. It’s sort of the in-between.

But that isn't to say it’s the best. In fact at times, it might not be the chocolate I want nor need

but it’s the one I feel has the means for me.

In today’s society I feel like everyone deserves a piece of chocolate.

And not just any chocolate but milk chocolate.

It might sound strange to say but let me explain

why milk chocolate is needed in everyone’s pockets.

We make a war of dark versus white chocolate.

It’s an “us” against “them” battle mentality.

For years, people have sided with one or the other.

Stating that the other person’s chocolate is meant for the gutter.

But what people don't understand it’s not a war to be won.

Dark and white chocolate, as different as they may seem, all come from one thing.

And that one thing is sometimes forgotten, causing all this ruthless ringing.

Since the 1960s, we have made vast improvements, after all milk chocolate is now ‘ight’

But recently, it has been brought to light

and it’s not right.

What people need to remember is that

it only takes one seed to create this magnificent sweet

Like us, it was born from the same thing.

So why are we still fighting, when we all should be biting,

Not into black dark not bright white, but into milk chocolate candy?

Putting aside our dark versus white mentality,

since it shouldn’t be a race battle…to see which on is better when we are the same.

Let’s talk about why bitter chocolate should be as equal as sweet.

Bitter chocolate, has been around for a while and was seen as the dominant.

This is due to the fact that, yes, it’s closest to the original seed.

But sweet chocolate has proved herself a worthy opponent.

She may have to work harder, add in some sugar and milk, but she is just as great.

Sometimes she is preferred over the original bait.

Sweet chocolate and bitter chocolate should therefore be seen as equals.

Have equal opportunity at being at a business and be bought and paid for at the same price since they are all the same peoples.

Better yet, let’s combine the two, bitter and sweet, and make them 50:50 percent equals.

Milk chocolate is the perfect balance of yum in the tum.

It’s enough dark and white plus bitter and sweet to make anyone go ‘Mhm.”

If I have learned anything at all, and trust me I’ve had my fair share of chocolate,

It’s not about which is better or which is worse.

It’s about which one will give you the sweet, delicious treat you can fit in you purse.

So next time you want a chocolate, just think

It’s equal and fair and doesn't judge or compare

It’s a surprise and treat meant just for me.

Oh and one last thing

Poetry Slam:
Everything is Awesome Scholarship Slam - CLOSED
This poem is about:
My country
Our world