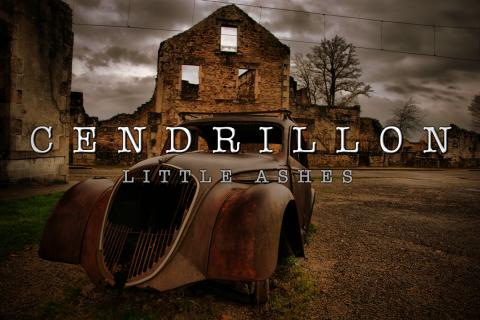 In the small town of Oradour-sur-Glane, France,

When the Nazis wore the pants,

A Schutzstaffel soldier lurks down the streets.

Handsome as he was, women sure thought he was a treat.

He was on patrol, back and forth he paced.

The soldier peered in, when a burst of flames made him hop.

Diverting his attention to the shop’s window display,

He spotted a vase as golden as the sunny day.

Another flash of fire flickered from within the store,

And off the soldier ran with his special little "ore."

As he frolicked away, his right shoe caught in a ditch

But it didn’t matter now, he was symbolically rich.

Abandoned the shoe and in a hurry,

It was an act of crime, yet he did not worry.

Later on that day,

The girl working in the shop gasped in dismay

When she discovered that their most prized possession

Was stolen due to someone’s selfish obsession.

The girl sought out to find the thief,

She stumbled and fell over a large boot

To which she picked up, and exclaimed with a hoot.

She would seek out to find the shoe’s owner,

Its beholder; its roamer.

Demand for her glass vase back,

But the identity of the crook was in lack.

For hours and hours, wandering around town,

Looking for the culprit, with an upset frown.

She crouched, squatted, and rolled around,

But the robber of the vase was nowhere to be found.

Finally, she slammed the shoe down with a sigh of distress

When a stranger walked by and she, he had impressed.

The soldier noticed that she carried his shoe,

Yet the fact that she was beautiful was all he knew.

Alas, he was an SS soldier and chemistry would not be,

For the uniform that he wore caused her to flee.

The woman was a glassmaker who the soldier adored.

Returned to the shop to ask for his kick,

He greeted the glassmaker, and immediately, eyes clicked.

Both blushing, the two fell in love,

From what seemed like a fantasy sent from above.

“Did you handcraft this?” interrogated he.

To which she nodded, “With all of my efforts, as you can see.”

The soldier noticed how she spoke with a burning passion,

So he returned the vase in an aspirated fashion.

"Could you grant me a simple request?"

Flustered, she agreed, "Of course, I'll make it the best."

His order was an excuse to see his beauty,

Ensuring she remained inside, hiding from tomorrow's reality.

Whoever is not German, they detest; they abhor!

What is known as the Oradour-sur-Glane massacre,

The soldier sheds a tear; he knows he will not forget her.

The time has come-- begin the slaughter.

Gather 'round those who hid and escaped,

Looks of horror as the innocent meet their fate.

As your village crashes.

For you no longer exist;

The end of a twisted fairy tale, this is it.

sur-Glane masscare: small village in Nazi-occupied France that was entirely

destroyed by Nazi-Waffen SS.) The name “Cinderella” is derived from the French

into a role reversal story, where “Cinderella” goes and looks for her “prince,” but

in the end, she is turned into what her name means: ashes. (It can also be assumed

that she's burned to death considering that she works with fire)*

Poetry Slam:
Once Upon a Poem Scholarship Slam - CLOSED
This poem is about:
Our world
Poetry Terms Demonstrated:
Allusion