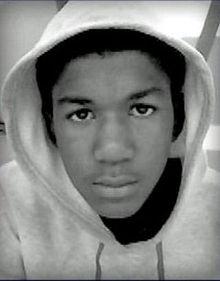 For the justice of humanity.

For the justice of Fong Lee.

For the killing of Trayvon Martin

who had a bag of skittles

but was shot for the color of his skin.

We stand up to manifest

this crime, created by mankind

which separates us into human species,

You know what it is:  racial profiling.

Under the law, it is not a crime

To stereotype; to criminalize, a person within sight,

but it IS a crime

to be black while wearing a hoodie at night!

“This guy looks like he’s up to no good, on drugs or something.

It’s raining and he’s just walking around looking about… These a**holes always get away.”

As if the black, brown, non-white skin

As if that secret will unleash at a certain place

So, you feel the need to defend yourself

by shooting that fear in the face.

I am done with "Minnesota Nice!"

I am done with taking race out of the injustice equation

so that others can feel comfortable.

For the justice of humanity,

For the justice of Balbir Singh Sodhi,

For the killing of Amadou Diallo,

who had a black wallet,

but was shot 41 times with pistols.

Because too often, they are judged by

and justice where money drops.

that were twisted to benefit

The Law of self-defense seems fair.

But if self-defense is so fair,

Then why are the guilty running free,

and the victims in misery?

If self-defense is so fair,

Then why are hundreds of police officers’ hands red,

stained by the blood of unarmed colored citizens?

If self-defense is so fair,

Then why did it took only 3 hours

for an all-white jury

of all counts of first-degree murder

for the shooting deaths of six  white hunters?

Although, Vang’s life was threatened and he protect it in the name of self-defense!

If self-defense was fair,

If self-defense was fair,

Zimmerman would be in jail because unarmed Trayvon could not defend himself!

How many more marches and rallies must civilians make,

until true justice can take place?

How much more tears will drench the earth,

and outcry reach up to the sky,

until we stop living in a Post-racial lie?

As long as we let the color of the skin justify our actions.

As long as we let the judicial system,

discriminate our colored men and women.

As long as racial ideologies drive our minds and our hearts…

There will be more Trayvon Martins…

For the justice of humanity.

For the justice of Trayvon Martin