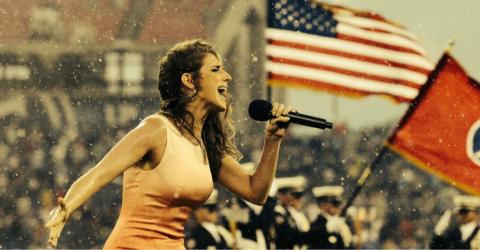 I know every note and every rhythm.

At every game, under the bright stadium lights,

No one is prouder than me,

My eyes are always trained to the canvas of

In truth, I'm afraid that it is disrespectful

to look anywhere else.

It is an honor to sing the National Anthem,

Everytime I hold the microphone,

I wait for silence.

I've been told to "start anyway," even though

my classmates are much louder than

Some don't look at the flag, or put their hand to their heart.

Others don't even stand.

When I ask later, they say,

"We won't stand until those words are true."

I live in a time when I'm not sure if that's good.

When a football player didn't stand because he wanted justice,

I could not blame him.

When the nation called the Star Spangled Banner the product of a racist man,

I could not seem to disagree.

The internet mocks those who don't sing up to par,

and then turns a blind eye to the real goings on.

that we should focus on the issues at hand.

That we should learn our National Anthem,

every note and every rhythm.

No one should be prouder than us, when

Our eyes should always be trained on the canvas of red, white, and blue, because

we are all the same under those hues.

Our actions are the downcast eyes during the National Anthem,

the ones that I see every week.

The ones that refuse to see.

And we all know how disrespectful that can be.

Poetry Slam:
America the Great?! Scholarship Slam - CLOSED
This poem is about:
Me
My country