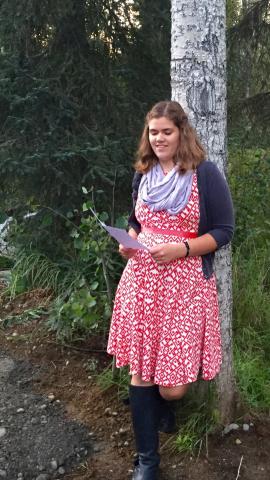 I write poetry because there are only so many ways that I can express how much I love spiders without sounding like a total creep.

People are afraid of spiders like they’re afraid of roller coasters: needlessly, because the chance of death is negligible. And that fear obscures all the fantastic moments that could be theirs, admiring these magnificent creatures.

Spiders construct their haunts in corners, ceilings, making enemy territory their own. They live upside down, sideways, suspended and tucked away. Arachnid acrobats, jumping on the faith that their homemade strings will hold them.

Strands of spider silk, by weight, are much stronger than steel. We try to copy them, but the closest that we’ve gotten is Spider-Man.

I forget that spiderwebs symbolize decay, and spiders: devouring things. Because, to me, they’ve never meant that.

They’ve meant trying again, like the spider who kept going up the water spout. Spiders mean that no matter how many times your web gets destroyed, you rebuild, and continue, and don’t mind all of the haters that fear you just because you’re different.

Humans have been imitating spiderweb patterns for thousands of years, weaving our own versions. Sometimes, spiderwebs are so compact that they hold water. And when it’s raining, those webs droop. They break, and are rebuilt.

But usually they just bend, because those little strings are tougher than steel.

When people see representations of spiders, they shudder. A picture of a spider cannot be separated from that.

But a poem can. Poetry can mean and do whatever you want it to. With a poem, you can change the way people think and feel and live.

And, with enough poems, maybe we can change the world so perfectly that humans will finally embrace the artistry of spiders.

Poetry Slam:
You, Me, and Poetry Scholarship Slam - CLOSED
This poem is about:
Me
Our world
Poetry Terms Demonstrated:
Chiasmus