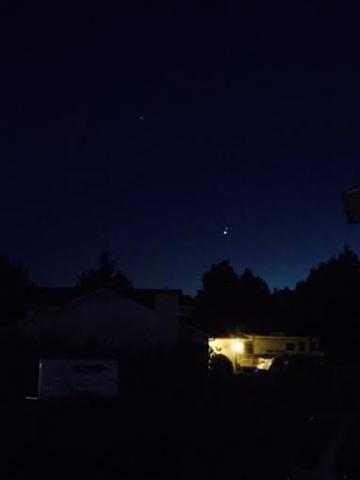 Tonight I wish I was walking on cobbled stone.

Because maybe if I was I would be able to drown the constant sex between the leaves and the wind.

I would be able to subdue their moans and sighs.

So instead I hear everything at a million miles per second, the mundane creaks of wooden fences act as periods to every thrust of every tree and air.

This sex reminds me of Mars and the North Star.

Maybe it's cause I can see them both, but they seem to be saluting me.

See, Right after the climax of the bark, Mars and north wink and boom.

Cackling across my suburbia.

And then trace back to their hole in the sky, to raise their hands towards I.

Somehow they remind me of you

(and perhaps they know that. Perhaps they're trying to tease me with your two freckles below your neck, those knifing little orbs. Maybe they are trying to evoke a frenzy in me, a coped up anger that inevitably would burst out my hair. Maybe they want a challenge, one that would cost a life?)

well somehow they make me cry, they stop the constant sex of the green and oak, they put a colon mark on the fence and silver nails, and they make me drown myself.

Cobbled stone streets would do nothing in a flood, and Mars and north knew that.

So they retreated, not cause they lost, but cause they realized the power of their actions, their tide.

They receded into the silouhet of hills, and stopped saluting, because I was breaking.

My fibers where tearing cause of the distance between you and I.

See, Tonight I wish I was walking in Oxford, by you. If I was, maybe Mars and north would be my friends.

Maybe the fences would act as steps, and maybe I would smile at the sound of sex.

Poetry Slam:
All I Need Scholarship Slam - CLOSED
This poem is about:
Me
Poetry Terms Demonstrated:
Assonance