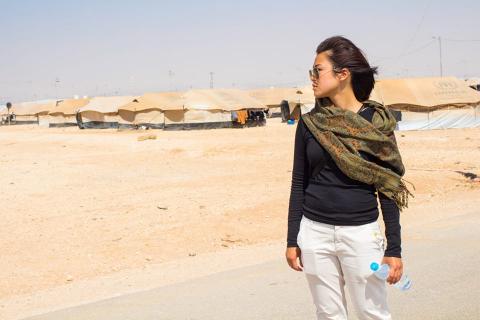 For the last few hours I have been straddling two entirely different social worlds. One of elaborate dinners with the Jordanian royal court and ridiculously overpriced drinks on exclusive rooftop terraces with privatized views of Amman. The other, coffee and tea with Syrian families in makeshift housing, sitting on UNHCR branded floors while listening to stories of entire families dying from overhead artillery shell bombings.  By day I assume the life of a humanitarian aid worker. From 9 to 5 I walk the expansive Za'atari refugee camp, the largest of its kind in the world, sit in a 8x8 shack with no air conditioning in the arid desert to hand out birth control and prescriptions for dry baby formula, and document stories of murder, mutilation, bombings, extortion, and corruption so terrifying that I can barely sleep.  I recount faces of widows, cry nonexistent tears when I see laughing children play over fresh tilled dirt from the mass graves of other children who have died in the camp, and force myself to watch homevideos of soldiers from President Bashar Al-Assad's government rip organs out of a dead rebel freedom fighter with their bare hands. The Syrian war is a grotesque killing spree. The carnage and brutality of the conflict between the government and Free Syrian Army is unfanthomable. I listen to stories of a children's hospital in Aleppo, Syria being bombed. A toddler standing with her entrails exposed and spilling onto the floor while she holds a confused expression on her face waiting for her savior to come.  Then I take the overcrowded minivan home at 5pm to the capital city of Amman and meet with a friend at a boutique restaurant perched somewhere on a hill with a millionaire view. For a moment, I transition to a lifestyle of spectacular opulence. I refrain from killing the ambiance with details from my day. Instead, we talk lightly about ourselves, our plans to visit world wonders, and desires to scuba dive off the Mediterranean coast. We laugh and clink glasses.  It gets late and I realize it is time to head back home. So I say goodbye and walk through a shady alleyway with cats and dark male figures. Sometimes down a staircase that reeks of urine, and other times pass child laborers covered in coal soot. I greet the child, avoid the unpleasant stench, and wander back to our work headquarters - a private apartment close to the rich international expatriate district.  Then I stay up all night going over my notes from the day and schedule some meetings for the week. Fifty-five women interviewed for baby formula rations. Fifteen denied because they were ineligible or lied about being the mother of the infant they were coddling in their arms so that they could sell the powdered milk for currency in the camp. I remember the newborns diagnosed with scabies and intestinal infections. And the patients in the overflowing psychiatric caravan waiting to commit suicide. At 5pm that night, as I boarded my minivan to dinner, dozens of men fought to claim a seat on a bus back to Syria, back to their homes in a mercilless war zone. The conditions in Za'atari are that unbearable. The seriousness and solemn demeanor of the earlier person returns. I am delirious. Tired, a bit irritable and looking at a clock that says I have to catch a cab to the next outbound bus soon.  To maintain any sense of balance between the two worlds, I straddle them. Confusing and surreal, feeling not so sure of how or what to make of the last few days. Goodnight.