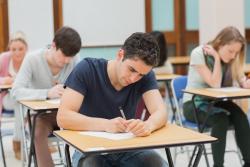 Whether you’re still in school, are about to graduate or have already moved onto the next chapter in life, nearly everyone can relate to what it feels like to be inside a classroom. Check out these five poems about school to see just how many different angles on education there are—then try writing your own.

The classroom is a compelling setting for a poem. After all, it’s a place where you can succeed beyond your wildest dreams, open your mind to new ideas, take on new challenges, and make friendships that will last a lifetime. It can also be the setting for a host of negative experiences — everyone's time at school is different. But no matter what, at school, it seems there’s never a shortage of subject matter.

Poems about school can be particularly moving if you need to give a speech at graduation. They can also be useful to read or write privately if you’re preparing for the upcoming challenges of high school or college. It can also be fun to reflect on school experiences you’ve already had- were there any embarrassing moments or times you wished you did something differently? To begin to appreciate the wide variety of poems about school, check out these five that center on getting an education—and all of the experiences that go along with it.

Remember when you were little and you’d fake a flu if it meant that you could lie on the couch all day and get out of going to school? Silverstein playfully captures that sentiment in the classic poem, “Sick.” In the humorous twist ending, the poem’s main character—Peggy Ann McKay—realizes that it’s not a school day after all and suddenly feels much, much better.

“Theme for English B” by Langston Hughes

In this heady poem, the African American poet Langston Hughes tackles huge questions about identity and race as he writes from the perspective of a black college student who is trying to relate to his white professor. His writing illustrates how a classroom is a perfect place to begin asking questions about who you are, who you want to become, and where you belong in the world.

“The School in August” by Philip Larkin

This descriptive poem paints the bleak picture of a school when it’s out of session in the summer. Through use of detail, Larkin helps you visualize how quiet, mysterious, dusty, and sad a classroom is without the noise of teachers and students talking and the clutter of flyers on bulletin boards and textbooks in desks.

All of the many things that can make you a nervous wreck on your first day of school are touched on in this beautiful poem, such as feeling far away from home, being smaller than other kids, and worrying about forgetting your own name. Written from the perspective of a small child, this poem will bring back what it felt like to enter kindergarten.

Instead of writing a poem from a student’s perspective, consider putting yourself in a teacher’s shoes. What would an aging teacher think when looking at young faces all day long? In this gloomy poem, the narrator (an instructor) is feeling depressed about getting older, but trying not to spread his grim outlook to his students so they don’t feel as “sentenced” as he does.

Note: “Ageing” is how they write it in Britain and this is a British poem, so that’s why it’s spelled that way in the title.

Alone
birds migrate south for the winter i just watch their 'v' formation above even the hurricanes know their destination i don't...

FEAR
When you’re all alone at night Looking for someone to talk to in sight Crying each night for not being good enough Though I...

I finally made it
My ninth grade year 2010 .. senior year 2014 as a stand in line, with my red cap and gown ready to walk across stage because...
END_OF_DOCUMENT_TOKEN_TO_BE_REPLACED

Poetry about Employment and Jobs