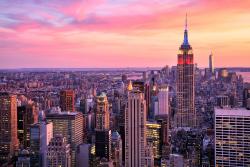 For many writers and aspiring writers, New York City is ubiquitous. It has long been one of the artistic centers of not only the United States, but the world; and very nearly every literary movement has had its moment in the city.

With so much writing surrounding a single place, it's hard to know where to start when trying to define the best. Looking for single works that capture something truly New York is like searching for a needle in a haystack. While it is easy to look out your window in the city and write about what you see, capturing a moment that encapsulates the city's soul is not as simple. We've compiled five poems that speak to what makes New York its undyingly unique self. They capture the sleepless, diverse, creative, musical city, while simultaneously speaking to its unknowable nature. There's no one definitive piece written on New York, but as each of these capture a unique fragment, together they can paint a larger picture. Read on to check out some poetic versions of New York City.

Teach Your Sons
Teach your son, That a man is one who protects and Shield, And not one, Who exploits others weaker than himself. Teach your...